Are Miners’ and Traders’ Struggles Overblown? Despite Their High Debt Costs?

A recent article in the London Telegraph likened the current position commodity traders find themselves in with the downfall of Bear Stearns in 2007 which, as we are all painfully aware, eventually led on to the collapse of Lehman Brothers and the whole mortgage-backed securities house of cards: enter the great financial crisis.

Before we dismiss it as wildly overblown, let’s pause for a moment and consider a few aspects of the current market compared to 2007. Bear Stearns’ High-Grade Structured Credit Fund, relied on huge amounts of borrowing to earn small margins through holding mortgage-backed securities, and then used sophisticated trading to supposedly eliminate risk.

Today, commodity trading houses — tellingly most of the banks have exited the market — rely on huge borrowing sums to earn small margins and are suffering from unpredictable prices and falling asset prices.

As a result, most of the major commodity houses have been selling inventory to raise capital to shore up their debt positions. The headline issue is their share prices, but the fact that privately held firms are also liquidating inventory shows the worry is more about reducing debt to shore up credit ratings than anything else.

As the article points out, credit markets are showing extreme levels of distress. The number of deals in the high-yield debt market slumped by 60% in the third quarter, when compared to the prior quarter, while companies that did access funding had to pay investors far higher interest rates for the money they borrowed.

Glencore’s US bonds due for repayment in 2022, for example, have collapsed to 82 cents on the dollar, while yields have risen to 7.4%. Credit default swaps have soared. For Glencore, they are at 625 from just 280 a month ago.

According to the article, any number above 400 represents a serious risk of default. So, the firm’s attempts to reduce debt — by scrapping dividends, raising fresh equity, closing unprofitable mines and, yes, selling inventory — can be seen as a drive to reduce these borrowing costs.

At 4% borrowing costs Glencore’s thin margins are profitable, at 7-10% they are not. Nor is Glencore alone; Trafigura, Vitol and Noble have all been experiencing similar problems, Trafigura’s bonds have collapsed to 86 cents on the dollar or a yield of 9.85%. While Noble’s bonds have fallen to 73 cents and a yield of 16% as the firm’s first-half profits from the metals division have fallen 98%.

Not surprisingly, Noble is reported by Reuters to be selling inventory and losing trading personnel just as fast as metal goes out the door. Indeed, the activities of trading houses have almost certainly further depressed physical delivery premiums for aluminum and zinc this summer. Many of these firms have been at this since at least July and possibly earlier.

Meanwhile, the catalyst for this demise is showing few signs of turning around. China’s imports and exports both fell again in September, down 17.7% year-on-year for the 11th straight month. Remember, though, that these drops are measured in RMB and, as such, falling commodity prices are going to depress numbers even if tonnage volumes remain the same, but manufacturing is also showing poor prospects as this graph of Chinese Purchasing Managers Index numbers shows

Without Chinese growth to drive demand, there is not much to support metals prices in the short to medium term.

Now, it is possible the sale of mining company shares and, indeed, the fall from grace of the whole metals’ sector has already been overdone. We don’t hold with the view that Glencore or any of the other major trading houses are headed for a Bear Stearns moment, but they clearly have problems. To the extent that they continue to dump inventory, traders will continue to depress prices. 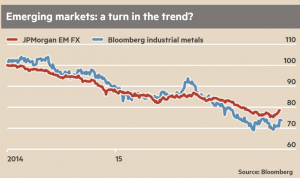 Mining company shares have risen in recent days, but they had fallen so far it is probable this is more of a dead cat bounce than a major change of sentiment. Some firms are following banks and winding down their exposure to metals. Noble is said to be investing in its more profitable energy trading activities.

Next week, we will see Chinese GDP figures released for Q3. The official target is 7%, the more likely number is 6.7%. Anything less will further weaken sentiment and not aid miners’ or traders’ debt ratings.