Saudi Arabia is taking a massive gamble on the world oil markets. Their “pump at any price” policy has driven oil down to below $50 per barrel and, so far, appears to be having the desired effect of squeezing out marginal producers, particularly in the shale industry, unable to cover costs at that level.

Every spike above $50, as happened last week, is met by a wave of hedging from shale companies. Late last week, US producers locked in new production at north of $50 for 2016 and 2017 delivery. As prices reached about $53, any further rise was limited by sellers locking in prices. Even so only some 11% of expected 2016 production is forward sold according to HIS Energy, quoted in Reuters. 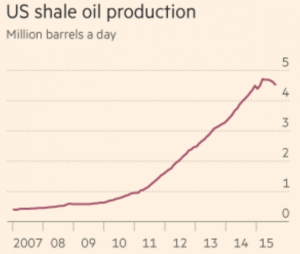 The Saudis had hoped they could drive down the price enough to squeeze out higher cost upstarts like the US shale industry. Indeed, the US government is quoted in the FT reporting that after adding 1 million barrels per day per year of production in every year since 2012. Next year will see the first decline, from 9.3 million bpd to 8.9 million bpd.

Emptying the Prince’s Trust Fund to Strangle the Shale Drillers

This has been achieved by Saudi Arabia at a high price, though, more than $1 trillion of future investment spending has been shelved across the globe and between 250,000 and 300,000 workers have lost their generally high-paid jobs there. 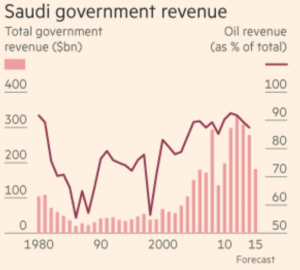 The kingdom, itself, will see its $246 billion 2014 oil and gas revenue fall by about 45% and will rack up a government budget deficit of $130 billion this year compared to 2013’s surplus of $48 billion. The Saudi government has ample central bank reserves, some $370 billion according to the FT, but they are rapidly burning through the next generation’s wealth as they pacify domestic unrest with generous subsidies and social programs.

To think that the ruling elite of Saudi Arabia can drive the entire US shale industry out of business, though, is a fallacy. Marginal producers such as the UK’s North Sea will see new fields shelved and some closed never to be reopened, while Artcic and deep-water reserves are not likely to be economically viable for years, if ever. The US shale industry plays to a different tune as a recent FT Briefing by Spencer Dale explained.

First, and I paraphrase, shale oil is likely to respond far more quickly to changes in prices than conventional oil production. The lead times between investment decisions and production of US shale can be measured in weeks, rather than the years taken for conventional production. And the life of a shale well tends to be far shorter than that of a conventional well, with production typically falling by as much as 70-80% in the first year.

As such, as prices fall, investment and drilling activity will quickly decline and production will soon follow. But as prices recover, US shale is likely to bounce quickly back. In this respect, shale oil becomes the new swing producer, whether US shale companies like it or not.

Second, US shale producers are far more exposed to the vagaries of the banking system. Relative to the major national and independent oil companies that dominate conventional supplies, shale producers are much smaller, more highly geared and most are dependent on a continued flow of borrowing to fund the investments needed to maintain production levels. As prices fall, banks are less willing to lend, curtailing investment. The current wave of hedging can be seen, in this light, as an attempt by those that have moved down the cost curve protecting their ongoing borrowing costs by locking in profits at a low, but still profitable, level.

Third, shale has introduced manufacturing-like processes into the oil industry. The same rigs are used to drill multiple wells using the same processes in similar locations. This differs from the large-scale, bespoke engineering projects that typify many conventional oil projects.

As with many repeated manufacturing processes, US shale is generating strong productivity gains. Productivity growth in US shale, as measured by initial production per rig, averaged in excess of 30% a year between 2007 and 2014. Lean manufacturing, if you like. To what extent this process can continue we will see, but the current low prices are certainly driving innovation in a way that $100 prices did not.

In the medium term, this drop in exploration and production is painful for workers, suppliers and investors in the sector, but it is worse for conventional producers where closed production may never be restarted. Rather than drive out US shale production, Saudi Arabia is ensuring that it becomes ever more competitive. The real casualties will be deep water and remote high cost producers like the UK, Russia, Brazil and so on.