EPA and WOTUS: Why Do Manufacturers Care?

As MetalMiner recently reported, the 6th Circuit Court of Appeals has stayed the Environmental Protection Agency‘s new water rule in all 50 states, giving a reprieve to manufacturers until the full court hears arguments over the legality of the new rule. The rule expands (to the detriment of clarity) the definition of “waters of the United States,” (WOTUS) and by extension the agency’s jurisdiction over private and public lands and their uses – what many states have contended is an overreach of the existing statutes under the Clean Water Act.

The National Association of Manufacturers (NAM) has called the stay a “tremendous victory,” as NAM Senior Vice President and General Counsel Linda Kelly put it last week, as the manufacturing industry continues its fight against the rule.

But our first question is, well, what the heck does this new rule entail?

And the second: is there any regulation the EPA proposes that isn’t confusing or overreaching?

It all seemingly hinges on “navigable waters.”

With the backdrop of precedent set by this Supreme Court case (involving a regional solid waste agency here in MetalMiner’s backyard that I covered for an unrelated story once), among others, the new rule proposes the inclusion of certain types of US waters that are not really, well, navigable, as part of the definition in what EPA and the Army Corps of Engineers can regulate.

Which means that the agencies would be given power to require manufacturers to obtain clean water permits for activities not previously required for things like:

As NAM puts it, “The result would be costly delays, expensive mitigation actions and denial of permits needed to build, expand and conduct day-to-day operations, and significant impact on the supply chain.”

Here’s a fun little infographic illustrating it a bit further: 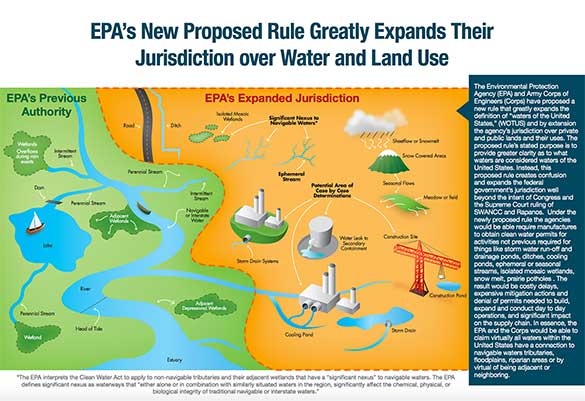 (At press time, MetalMiner is waiting for comment from additional sources on the impact of the proposed water rule on manufacturers.)

So are we living in the greatest era of EPA over-regulation? One indicator that may support that claim: according to the Chamber of Commerce, in 1976 there were just over 7,400 federal rules in place; by 2009, there were 170,000.

Sound familiar? We’ve been reporting on the same uncertainty and confusion surrounding EPA’s Clean Power Plan rule. Oklahoma – one of the 17 states to formally challenge the water rule – joined in the filing of a petition against EPA’s CPP earlier this year, alleging “the EPA’s Clean Power Plan would force Oklahoma to restructure generation, transmission and regulation of electricity in such a way it would threaten Oklahoma’s systems and possibly Oklahomans’ pocket books,” according to this source.

The simple facts that the 6th Circuit Court of Appeals has stayed the new water rule across the country, and that more than 20 states intend to file a lawsuit against the EPA’s Clean Power Plan as soon as the rule hits the Federal Register – with a good chance the courts could stay that too – make it clear that regulatory overreach is a huge issue for America’s manufacturing community.

PREVIOUS POST:
Zinc, Back in the Limelight, Faces An Uncertain Supply/Demand Picture
NEXT POST:
AISI Condemns Treasury For Not Calling China a Currency Manipulator