Officially, the Chinese economy grew faster than expected in the third quarter, according to China’s statistics bureau who said GDP rose 6.9% in the third quarter in inflation-adjusted terms, down from 7% in the first 2 quarters and 7.3% for full-year 2014.

But, Beijing’s growth figures have been the subject of considerable conjecture for years and the current gradual slowdown official figures report seem at odds with the low Purchasing Managers Index numbers reported this year. 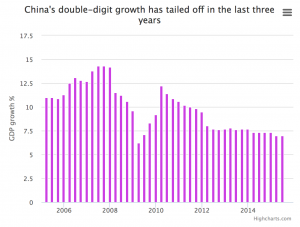 True to say, in the detail there is strong evidence of a 2-speed economy, officially industrial output in September grew at just 5.7%, the slowest pace since 2008, while Property investment slipped to 2.6% in the first 9 months, the lowest growth since 2009.

Going From Investments to Services

Beijing’s attempts to re-engineer the economy away from an investment-led export model to a consumption-led services model, while showing considerable success, is also throwing traditional models designed to measure growth into turmoil. The official figures show resilient growth in the emerging services sector which helped compensate for weakness in manufacturing and property, but the reality is no one has believed the official figures for years.

Willem Buiter, a former Bank of England rate-setter and influential economist at Citi, is reported in the Telegraph as saying “There has been a long history in China of the official GDP data understating true GDP during a boom and overstating it during a slowdown.”

Indeed, it would seem even China’s economists don’t wholly believe their own data. When Li Keqiang, China’s premier, was a senior party official in Liaoning a decade ago he developed the Li Keqiang Index, said to focus on 3 factors – bank lending, rail freight volumes and electricity production. 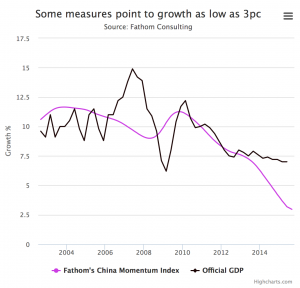 On that measure the economy has stalled, falling to just 3% this year, according to a consultancy operating the index. But others argue the index is heavily biased towards China’s traditional industrial model and, therefore, not as appropriate today for measuring an economy where comparatively so much more of the activity is in services and consumption.

By comparison Capital Economics, a London-based research firm, has been collecting its own series of indicators, dubbed the China Activity Proxy, since 2009 according to the Telegraph. Despite showing a sharp downturn at the start of the year – where GDP collapsed to around 4%, it has since picked up following a revival in credit growth and is now expected to hit 4.5% this year and 6.5% next year. 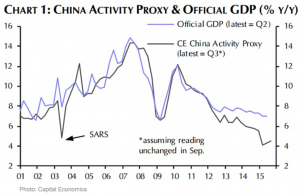 Capital Economics’ model did, for many years, fairly track the official measure, with the exception of during the SARS crisis, but more recently it has begun to diverge. Not for a few months here or there, but in what looks like a long-term trend.

This may, again, have something to do with changes that are happening in the Chinese economy and the suitability of CE’s measures in the “new China.” Or it may throw a spotlight on Beijing’s measures. One thing seems sure, the days of 8-10% growth are long gone and the new normal may not be much more than 4-6%. That’s still substantial for an economy the size of China’s, but not what we are used to.

PREVIOUS POST:
India’s Climate Control Blueprint: Will it Come True? Can It?
NEXT POST:
As the US Dollar Nears Support, Its Movements Will Be Crucial For Metal Prices