MetalMiner has long reported on product developments within the metals industry. Years ago, (okay, we’re not that old, 7 years ago), my colleague Stuart Burns discussed several types of rare earth extraction processes that would enable rare earths recycling.

At the time, all 3 processes lacked commercial viability for several reasons – typically because of cost or not yielding pure metals on the back end or both. 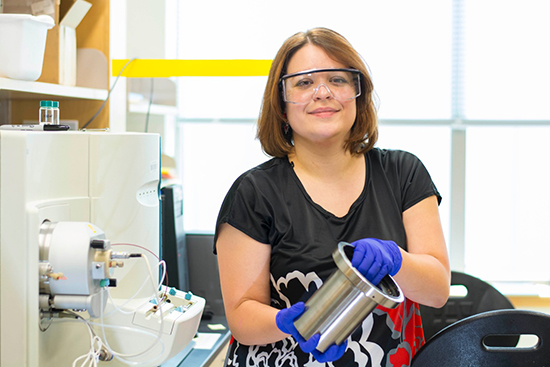 Marion Emmert and her team at Worcester Polytechnic Institute have come up with a new way to extract rare earth elements for recycling. Source: WPI

Today, a team of researchers at Worcester Polytechnic Institute may have developed both a technically viable means for recycling rare earths – specifically neodymium, dysprosium and praseodymium from the drive units and motors of discarded electric and hybrid cars – as well as a commercially viable one.

According to my colleague Stuart, 3 extraction processes (the methods of pulling rare earths apart from other metals) exist:

In an interview with MetalMiner, WPI Professor Marion Emmert described the process she and her colleagues developed.

“With motors we have a bunch of different materials – magnets, steel and copper, and often we don’t know the alloy of steel,” Emmert said. “The process we’ve developed enables us to separate the rare earth materials selectively from all of the other materials in the motor.”

There are several elements to this process.

“First, we pre-heat the motors to get rid of the magnetism,” Emmert explained. “|Next, we have developed a materials mixture that dissolves the magnet material so you can put the other metals into a regular recycling stream. Next, we add another reagent to the obtained mixture of rare earths plus iron (a dark black solution containing the metals as aqueous salts) that creates a white powder that contains only rare earth oxalates. We are achieving more than an 80% recovery rate because the solutions or mixtures we have developed are very selective.”

Part of the science, according to Emmert, involves the fact that rare earths are inherently reactive with oxygen and water.

Emmert subjects the solution coming out of this process (containing iron hydroxides, boronic acid and traces of rare earth hydroxides) to pyrohydrolysis, a process that is well established in steel pickling. This allows for the recovery of the acid used in the first step, making the process more sustainable and closed loop. The result is solid iron oxides, boron oxides, and traces of rare earth oxides. This solid can then be sold to the iron ore processing industry.

Emmert knows the technology and processes she and her team have developed aren’t as cost effective as mining, say, neodymium. However, as regions such as Europe deploy regulations requiring automakers to build cars with a minimum percentage of recycled products, a fee-based model could work and help automakers and OEMs meet the more stringent regulations.