We reported last week on the dire state of the UK steel industry and it is often and widely reported that the US industry, likewise, faces challenges from imports and weak domestic demand.

U.S. Steel has been one of the worst affected by the imports and resulting price pressure. Its shares have fallen 69% in the past 12 months and, after cutting 3,000 jobs from its North American workforce in 2014, it has warned of further redundancies this year.

But we often assume Asia is more or less immune from the competition and challenges our domestic steel producers face so a recent series of articles in the Financial Times makes interesting reading.

They report on the position of South Korea’s POSCO, the world’s fifth-largest steel producer who, on the face of it, appears to be weathering the storm of low prices quite well. One article says quarterly sales were down 14% at its core South Korean steel unit last week but said operating profit was flat and its operating margin improved a little, helped by the firm’s focus on higher value-add and technologically sophisticated products for industries like automotive and aerospace.

But another article paints a harsher underlying picture saying the senior executives have pledged 10% of their salary to buy shares in the company, a move that, on the face of it, seemed to help the share price rise but, in truth, was probably of no more than a token gesture.

Shareholders were more encouraged by the firm’s announcement that, after spending $25 billion over 5 years expanding the group, it is now willing to divest itself of some 89 of its affiliates (nearly half of its divisions, according to the FT) by the end of 2017. All in order to focus on its core business.

The aim is to reduce debt, made worse by the fact much of it is in US dollars which have been strengthening in anticipation of a rise in Federal Reserve interest rates, although that didn’t happen yesterday.

POSCO is not alone in facing this dilemma. The World Bank, among others, has been warning for some time that many emerging and, even a few more mature economies, have borrowed far too heavily in dollars and are now facing crunch time as they are hit by a double whammy of a rising dollar making debt servicing more expensive in their domestic currencies even before interest rates begin to rise next year, further adding to the debt repayment burden.

In an effort to support its share price, POSCO paid out more in dividends last year than its earnings, an untenable situation particularly for a firm facing a rising debt bill. In the 12 months to June, net debt was nearly 4 times earnings before interest, tax, depreciation and amortization (EBITDA), according to sources quoted by the FT. Compare that to BHP Billiton’s ratio, also using heightened dividends to support its share price, and BHP’s is just over 1 times its EBITDA. 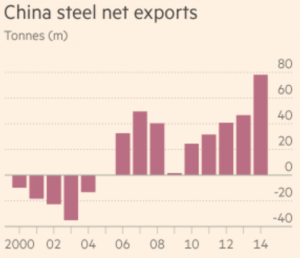 Aside from POSCO’s debt, it is facing intense competition from Chinese exports both in its home market and in its export markets. Since 2000, China’s annual production has expanded nearly sevenfold, the FT says it reached 858 million metric tons last year. Exports are now topping 100 mmt per year, much of it saturating southeast Asian markets and directly competing with the likes of POSCO in some sectors. 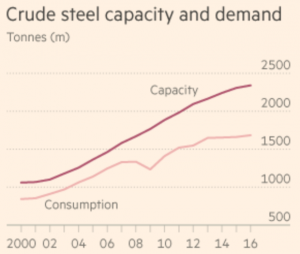 Overcapacity is a global problem, but in the ’90s when the world watched the likes of South Korea expand, markets were largely able to absorb the new production.

China’s growth in the last 10 years, though, has been on a wholly different scale. POSCO, like the Japanese producers, has so far weathered the storm quite well, how they cope with the next 1 to 2 years, though, will really test their mettle… and their metal.