This is part two of a series on market bottoms. Check out part one if you missed it.

Prices for many metals are probably close to a bottom simply because the current market price is below the cost of production. Glencore has not curtailed production of copper and zinc out of altruism, they have done it because the mines closed are not economic.

Without courting innuendo I am not going to enter into a long evaluation on the shape of bottoms and whether we can expect a sharp pointy one or a big fat, flat one. The reality is the shape will depend on the particular metal’s supply and demand fundamentals, and investors’ view of those fundamentals.

Some commodities, such as oil, may already have begun to turn as swing producers like the US shale industry stop drilling and OPEC huddles to consider how much further they can afford to drive prices down. The big unknown remains Iran. If the spigots are opened following a relaxation in sanctions then OPEC may have to come to some kind of accommodation on production to stop the market reversing recent rises but that market looks like it’s going to be the big, fat bottom kind.

Shale producers will come back to the market if prices exceed $60 per barrel effectively halting any further significant rise. The FT quotes sources saying production cuts in zinc, nickel and copper may mean those markets have also bottomed, but one issue the market is only slowly coming to realize is that some of that massive Chinese investment boom in response to China’s 2009 stimulus package went into the mining and refining of base metals.

China has built itself massive new capacity and is moving from a consumer to exporter of metals, a trend accelerated by the slowdown in domestic demand as the economy moves away from resource-hungry industry toward domestic consumption growth.

Think steel, aluminum, and stainless steel; oversupply from china in these commodities will ensure we have a dead cat bounce kind of bottom, prices of these commodities aren’t likely to rise far or fast for years to come.

Another trend that is perpetuating the situation is that, at least in some commodities, currencies are shielding producers from the worst effects of falling global prices. For the sake of example, take soybeans. Over the past five years, the price of soybeans has dropped by 28% in dollar terms, the FT reports. But price in the Brazilian real’s depreciation against the dollar and soybeans have actually gained 64%. 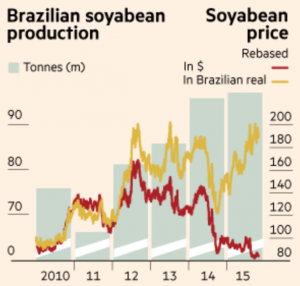 A US agricultural attaché in Brasília is quoted as saying “Despite lower global soybean prices, the weak Brazilian real is compensating with higher domestic prices and is encouraging farmers to increase area.”

This is true, too, of oil In Russia, to an extent, where the ruble has collapsed against the dollar. It is true of ferro alloys in South Africa as we wrote recently, and to a more limited extent it is true of China following revaluations of the renminbi, now a major exporter of many base metals and steels. In all such cases it reduces producers need to curtail production to support prices. Indeed, in some it encourages greater production.

So if we are near the bottom for many metals we have little to fear by way of a sharp rebound in any. To a greater or lesser extent they are all plagued by oversupply, in some cases active steps are being taken to address this such as with copper, and for those metals a recovery next year is a probability but generally high inventory levels will dampen the rate and timing of any upswing giving consumers plenty of time to adjust to a new trend and act accordingly.

For others, such as aluminum and steel there is a an opportunity to take a longer-term view and consider material substitution or design changes to take advantage of what could be long-term price changes. A flat bottom if that is your wish, or a new normal if you prefer.

PREVIOUS POST:
Goa Iron Ore Exports Start Up Again in India, Tata Steel Invests in Canada
NEXT POST:
When is A Market Bottom Really a Bottom?