Home | Commodities | When is A Market Bottom Really a Bottom?
Commentary

When is A Market Bottom Really a Bottom?

A recent Financial Times article made an interesting comparison between our current fall in commodity prices and falls following previous price peaks.

The FT says that after commodity prices peaked in 1997, it took 21 months to arrest that fall. In 2000-01 it was 13 months. After collapsing, along with the global economy in 2008, commodities hit the floor in just eight months. 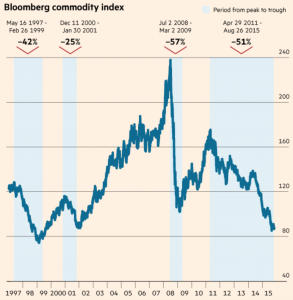 This time, the Bloomberg Commodity Index has been in decline for four years and counting. From its most recent peak in May 2011, the benchmark is off by half and scraping the lowest levels of the 21st Century.

When will it hit bottom and what will that look like? This graph is what a recent Economist Intelligence Unit report suggests the trend may look like. Yet, you have to ask, in a world expecting the imminent rise in Federal Reserve interest rates, with high levels of corporate and state debt and variable levels of growth around the world are we really going to move from a state of volatility to a situation of slow benign gradual price movements for the next 2-3 years? 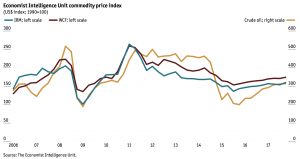 The FT article and the EIU report tend to look at the issue from the asset class point of view, suggesting recent cuts in output by major producers, such as Glencore in metals and ExxonMobil in oil, will work their way through to support prices next year. But as metals consumers, we know only too well that a metal is capable of going in one direction and another is capable of going in the opposite if the fundamentals are sufficiently diverse.

Prices for many metals are probably close to the bottom simply because the current market price is below the cost of production. Glencore has not curtailed production of copper and zinc out of altruism, it has done so because the mines it closed are not economically viable.

Without courting innuendo, I am not going to enter into a long evaluation on the shape of bottoms and whether we can a expect sharp pointy one or a big, fat flat one, the reality is the shape will depend on the particular metal’s supply and demand fundamentals, and investors’ view of those fundamentals.

Check out part two of this article, featuring Stuart’s analysis of the oil market and several metals.