This is the first of a multi-post series on a major infrastructure and historic preservation project near and dear to our hearts here at MetalMiner headquarters in Chicago, and how structural steel procurement and delivery helped it succeed. 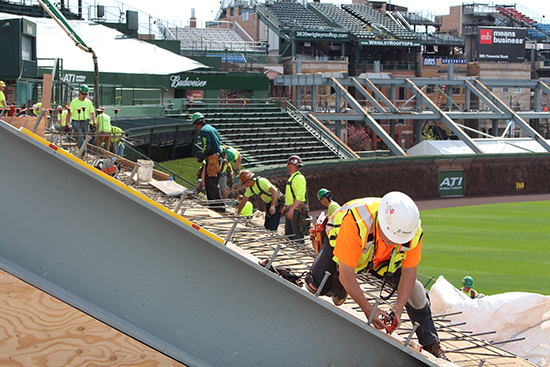 Major League Baseball’s Chicago Cubs began one of the most important offseasons in the club’s  history last year. The 1060 Project, named after the street address of Wrigley Field at 1060 W. Addison St. on Chicago’s North Side, got underway immediately after the Cubs season ended.

The development, led by the Ricketts family, will preserve the beauty, charm and historic character of “the Friendly Confines” that fans have cherished for more than a century, while simultaneously updating and improving it for both fans and players.

The primary focus of the first phase was structural work to prepare Wrigley Field for enhancements and improvements over the course of the construction plan, and the restoration and expansion of the Budweiser Bleachers.

Pepper began the process with laser scanning to reliably document the exact geometry of visible existing conditions in the pre-World War I ballpark. The information from the scan was used to create as-builts, which were shared with design firms VOA Associates and DAIQ. This will help the team plan for future phases of the project. As progress is made, the team will continue capturing data for as-built conditions.

“You can theoretically ‘walk’ the entire stadium beginning at gate K and do a loop around the whole ballpark over the concourse in the 3D model imported from the scan,” said Kevin Heatter, project executive at Pepper.

The concourse is a key part of the renovation, supporting the expanded seating in the bleachers, providing more accessibility and improving access to expanded concessions. The ceiling and below-grade areas also house the mechanical, piping and steel structural supports of the bleachers. By creating a model of this area, engineering and construction teams could make well-informed decisions.

In part two, see exactly how that information was used in the construction process. Follow Jeff Yoders on twitter at @jyoders19.