Home | Ferro Alloys | Is Coal Headed For a Collapse? From Simple Lack of Demand?
Commentary

Is Coal Headed For a Collapse? From Simple Lack of Demand?

It won’t be environmentally motivated investors or carbon-emission caps that drive coal producers out of business, it will be good old supply and demand.

Recent developments suggest China, the world’s largest consumer of thermal coal for power generation, could become a net exporter as soon as next year if current trends continue. Government-backed researchers are urging Beijing to delay expansion plans for coal-fired power plants, on the basis that further additions of generating capacity will lead to electricity oversupply.

“If it keeps on growing with no control, the oversupply troubling the steel and cement industries would be even worse for the power sector,” said Yuan Jiahai, a professor at the North China Electric Power University. Electricity demand grew at the slowest rate in 30 years in the first half of this year, according to the WSJ. The official Xinhua News Agency on Tuesday quoted Ouyang Changyu, deputy secretary general of the China Electricity Council, as saying the group had revised down its full-year electricity-demand estimate to 1% growth this year, from 2% previously.

As recently as 2011, electricity demand had grown by 12% annually. In the first nine months of 2015, electricity demand grew by 0.8%, as recently as the same period last year it had grown at 3.9%. Coal-fired generators produced just under 315 billion Kilowatt-hours of power in September, down 3.6% on the year and representing 69% of total power generation. The figure would have been lower but for low reservoir levels and, hence, reduced hydroelectric power production that saw hydro down 6.7%, according to Reuters.

Part of the reason for falling electricity consumption is the twin drivers of reduced emissions and economic changes. Beijing has tried, with limited success to close more polluting steel, cement and similar industries to reduce environmental pollution in major cities such as the capital. At the same time the economy is going through a longer term rebalancing of investment away from more energy-intensive heavy industry and toward lighter industries serving domestic consumption and services. Some are arguing the headline GDP growth rates are also skewed, questioning how electricity growth can be static, even fall, when the country is going through supposedly 6.7%+ GDP growth?

That aside, China’s coal imports are down by 31% in the first quarter, according to Bloomberg, leading a global drop in demand that saw coal use in power generation down 4.6% in the first nine months of this year. The paper says that’s a decline of 180 million metric tons or more than 40 mmt more than was consumed by Japan in the same period. 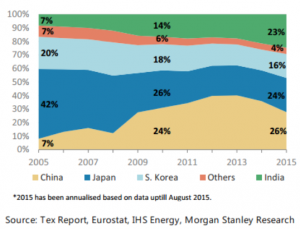 Only in India is coal consumption still relentlessly on the rise even as the country adds considerable renewable power capacity, but then as India is all-too-ready to point out, when it comes to electricity supply they have a lot of catching up to do.

As China’s demand for imports falls, as plants are closed in North America and Europe and as new capacity from legacy investments continues to come on-stream the resulting collapse in prices could see resources still in the ground become uneconomic. Either way, it suggests power costs will remain low for many years to come with the only threat being carbon taxes on the most polluting energy sources such as thermal coal.

PREVIOUS POST:
GOES M3 Spot Price Takes a Dive, But Not For the Reasons You Think
NEXT POST:
Copper MMI Unable To Rally Despite Shutdowns, Small Gain