Even Production Cuts Can’t Save Copper

While Copper slid to a new six-year low last week, there is some discussion about exactly why.

Everyone can agree the market is oversupplied, demand has slowed in China, consumer of over 40% of the world’s copper and for Barclays believes China is partially responsible for the latest fall.

Chinese demand is a big part of the problem. The WSJ printed, last week, comments from the bank’s most recent note to investors. “There’s over a million tons of additional supply coming online next year and the year after during a time when demand is seeming to stall,” said Dane Davis, a metals analyst with Barclays in New York.

“Not only are prices going to be lower, they will be lower for a sustained period.” Global copper output is expected to reach a record 22.89 million metric tons this year, while demand is expected at 22.4 mmt, according to Barclays, that’s some half a million tons of overcapacity. Production cutbacks by the likes of Glencore and Freeport McMoRan, however, should balance that excess but it is the extent to which this new capacity comes on stream that worries Barclays. Certainly, China’s consumer-price inflation decelerated in October, according to data released on Tuesday suggesting growth will continue to slow unless some currently unexpected stimulus measures are announced. 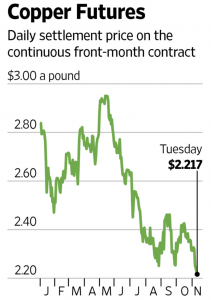 However, others disagree, saying the current weakness in the copper price has more to do with a bounce in the strength of the dollar. The dollar appreciated to its strongest level since April this week versus the euro and its highest in more than two months versus the yen after a Labor Department report showed US employers added 271,000 workers in October, the most this year. Good jobs data increases the likelihood of a December rise in Federal Reserve interest rates and the US Dollar responded accordingly. A stronger dollar makes all dollar-priced commodities more expensive for non-dollar economies suppressing demand and, hence, prices.

There is more to it than just the dollar though. Although inventory on the London Metal Exchange has been falling it has been rising on the Comex and the Shanghai Futures Exchange, according to the FT. With some quarters predicting the dollar will hit parity with the Euro next year and be below 1.50 to the Pound by the end of this year, the pressure will remain on the copper price. Expect a rebound from recent lows, but it won’t arrest the trend.