The big meeting is due in December, the eyes of the world will be upon the assembled dignitaries, will they be able to reach an agreement and what impact will that have on the world? Are we talking about the 2015 United Nations COP 21 Climate Change Conference in Paris?

No, we are talking about OPEC’s summit in Vienna on December 4. In the short- to medium-term the price of oil will have a bigger impact on the citizens of the world than anything agreed to in Paris. OPEC is facing a revolt the likes of which has not been seen since the 1970’s. Many members, indeed most members are at a breaking point and Saudi Arabia has been accused of running the cartel for its own ends against the wishes of the majority.

The club is coming apart at the seems. Algeria’s former energy minister, Nordine Aït-Laoussine, is quoted in the Telegraph as saying the time has come to consider suspending his country’s OPEC membership if the cartel is unwilling to defend oil prices and merely serves as the tool of a Saudi regime pursuing its own self-interest. “Why remain in an organization that no longer serves any purpose?” he is quoted as saying.

The International Energy Agency (IEA) estimates that the oil price crash has cut OPEC revenues from $1 trillion a year to $550 billion, setting off a fiscal crisis that has far-reaching consequences, particularly in the Middle East already riven with sectarian unrest and four civil wars.

The widely accepted aim of Saud Arabia, and a small band of Gulf partners, is to drive US shale producers to the wall and thereby choke off the threat to OPEC’s dominance. If that is the case the battle is proving much harder than was probably anticipated. So far US output has only dropped by 500,000 barrels per day but still stands at 9.1 million b/d, much as it did this time last year. True, there is only so long hedging can keep some producers in business or technology can reduce costs, but the US Energy Department expects a loss of only 600,000 b/d next year, far from a collapse and by then OPEC will have foregone another half trillion dollars.

As the Telegraph points out, the infrastructure and technology in the US remain in place even if some shale producers go to the wall. If oil price move back up to $60+ new firms will come into the market and production will rise again. The US shale industry has become the new swing producer whether Saudi Arabia likes it or not.

Another less well debated target could be to check solar and wind power the paper suggests, both of which are terribly price dependent. The oil price does not directly impact electricity prices but certainly has an indirect effect by its impact on natural gas prices often linked to the oil price and hence natural gas or LNG’s ability to compete with renewables. But the move to renewable is inexorable, driven in some quarters by politicians desire to “do the right thing” and in others, such as China, by the knowledge that more of the same would result in such a widespread health risk that civil unrest could be the end result. 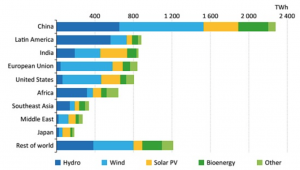 Which brings us back to Paris, the two summits are not unrelated.

Attempts to limit carbon emission have already reduced oil demand. OPEC forecasts that oil demand will keep rising relentlessly, adding 21 million barrels of oil per day (b/d) to 111 million by 2040 as if nothing will change.

Yet, car producers the world over are not pouring billions into electric vehicles to be trendy, they know the internal combustion engine is, in the long term, a dead end. Paris will hasten that trend and as if in recognition the IEA says oil demand will be just 103 million b/d in 2040 even under modest carbon curbs. It would collapse to 83.4 million b/d if global leaders really grasp the nettle. Rather than try to drive other supply sources out of business, the Saudi’s would be better off maximizing their returns for as long as they can, it is after all a finite resource, both in terms of supply and in terms of demand.

The crunch though may be none of the above but the gradually collapsing geo-political state of the Middle East, as governments struggle to maintain budgets in the face of the oil-related revenue collapse.

Most petro economies have become used to huge government largesse, austerity in the form of salary reductions, a break on new hiring, reductions in subsidies or welfare payments could result in unrest in an area not noted for its calm debate in recent years.

Unhappy populations right across the Middle East are more likely to turn to extremism if there are no jobs or prospects. As the paper points out Saudi Arabia, itsel,f has suffered five Isil-linked terrorist acts on it’s soil since May, several of them targeted at oil installations, probably as the terrorist organization also has an eye on raising the oil price. Isil is largely funded by oil revenues and no doubt is also facing a drop in income as a result of Saudi Arabia’s stance. Saudi Arabia is playing a high stakes game, a game that if I were the halftime coach I’d be instructing the team requires a change of tactics in the second half.