In the run up to the Paris Climate Change summit next month, there has been talk of stranded assets among fossil fuel producers. Coal, of course, is the front runner for a number of reasons, but principally because it is the most polluting major fuel under currently usable technology and, as such, the most “at risk” against carbon taxes or tougher environmental emissions legislation

A recent IMF report states that the fossil fuel industry has been and continues to be subsidized to such a degree that simply ending what it estimates to be the industry’s current subsidies would cut carbon emissions by 20%. The IMF isn’t some academic institution whose conclusions can be easily dismissed, governments and the media listen to what the fund says and its policies touch us all in different ways, so when it speaks so clearly — particularly when it puts it’s weight behind a movement that is gaining momentum in the run up to December’s summit — it has an impact.

The IMF claims the subsidies are largely made up of polluters not paying the costs imposed on governments by the burning of coal, oil and natural gas, according to an article covering the topic in the Guardian newspaper.

These include the harm caused to local populations by air pollution as well as to people across the globe affected by the floods, droughts and storms being driven by climate change. Leaving aside the global effects on weather, which are contentious both in their extent and effect, ending the subsidies (and therefore cutting consumption) would slash the number of premature deaths from outdoor air pollution by 50% — about 1.6 million lives a year — the report claims.

Of course it’s not as simple as that, such a massive swing from using coal for power generation and alternatives to oil for transport could not be achieved reliably in the short- or even medium-term, renewables are so variable in delivery and most power grids so inflexible they could not cope with a rapid switch but that would not stop the process, merely slow its roll out.

The IMF report estimates the subsidy at $5.3 trillion for 2015, making it greater than the total health spending of all the world’s governments, or put another way the subsidies represent 6.5% of global GDP.

Just over half this figure is the money governments are forced to spend treating the victims of air pollution and the income lost because of ill health and premature deaths. The article not surprisingly sights coal as the dirtiest fuel in terms of both local air pollution and climate-warming carbon emissions and says it is therefore the greatest beneficiary of the subsidies, with just over half the total. Oil, heavily used in transport, gets about a third of the subsidy and natural gas the rest. 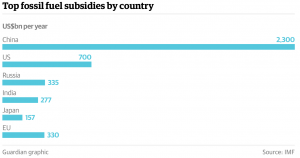 Not surprisingly, a large part of this is in Asia with the biggest single source of air pollution as coal-fired power stations and China, with its large population and heavy reliance on coal power, providing $2.3 trillion of the annual subsidies, the paper reports.

The next biggest fossil fuel subsidies are in the US ($700 billion), Russia ($335 billion), India ($277 billion) and Japan ($157 billion), with the European Union collectively allowing $330 billionn in subsidies to fossil fuels.

The Guardian article has an intentionally rather scary interactive graphic towards the end that shows the tons of coal being extracted, the cubic meters of natural gas, the barrels of oil being consumed, among other data points – as you can imagine the numbers are moving so fast they are a blur. The point is we are releasing carbon stored over hundreds of millions of years back into the atmosphere in less than 200 years without any penalty being applied to those that are profiting from the activity.

Who Profits From Fossil Fuels?

The fossil fuel industry would probably argue we all profit from the benefits of cheaper energy but in other areas of industrial activity polluters pay for the release of pollutants — being they atmospheric, water or solid waste — into the environment.

No one is suggesting the fossil fuel industry is not operating within the law, at least within North America and regions such as Europe, there are no grounds for fines being applied for breaking laws, but if lawmakers take the IMF report to heart, they may embrace one of several possible carbon emission controls such as a carbon tax or stricter EPA emission limits with far-reaching implications for both energy prices and the value of carbon-based assets such as coal mines, and oil and gas fields.

Energy companies have largely shied away from addressing the issue, preferring to both invest in lobbying to prevent penalties being imposed and, for some, moving by into lower-carbon intensive energy sources such as Royal Dutch Shell’s move to buy the BG group, (formerly British Gas) in the process increasing its share of energy production from less-carbon-emitting natural gas. Ultimately, though, some, maybe many, coal resources will stay in the ground unless some economically viable technology is developed to allow energy production without emissions to take place.

The fact the world cannot do without energy from even coal, let alone the whole gamut of fossil fuels, anytime soon will not stop legislators from backing a growing momentum to try. The financial cost will be directly borne by consumers, it always is, but to the extent that this process can bring the major emitters such as China and India on board in reducing carbon emissions may be that will be a price worth paying. The question is will they come on board.

PREVIOUS POST:
Zinc and Lead Give Up Recent Price Gains
NEXT POST:
What the US Steel Industry (Still) Thinks Of Ford Motor’s Aluminum F-150