Johnson Matthey is Feeling the Fallout From the Volkswagen Emissions Scandal

In a graphic example of how ripples from the stone that was the Volkswagen emissions cheating scandal are spreading across the rest of the automotive pond.

Johnson Matthey’s share price dropped further during September when the scandal first brook, but has since recovered as it dawned on investors that the result of VW’s emissions scandal is likely to be tougher controls… even if there is a marked swing to gasoline engines. 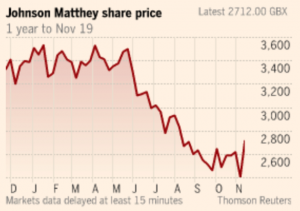 Johnson Matthey was already in trouble due to a combination of falling platinum group metals prices and slowing demand, notably in key automotive markets such as China, for jewelry and in the oil industry as investment has been cut back.

The refiner is the world’s biggest maker of metal catalysts for car emission control devices, but even before VW’s scandal hit diesel car sales, the firm was looking at restructuring its operation and cutting about 200 jobs.

The restructuring was expected to cut costs by about £30 million ($45 million) each year but only after a one-off charge of about £40 million ($60 million), plus the loss of some jobs from its process technology and precious metal refining divisions.

JM employs some 13,000 people worldwide and is a world leader in providing catalysts for diesel cars. Diesel catalysts, which provide more than half of Matthey’s annual sales, are about five times more profitable than equivalent gasoline and hybrid filters, according to the Financial Times. Investors had, therefore, hoped diesel would gain popularity in the growing US market, where the fuel has a market share among engine makers of between 5 and 8% compared with nearly 50% in the more moribund European market, Deutsche Bank said.

Diesel sales, needless to say, have run into a metaphorical brick wall in the US following VW’s admission it had been rigging emission tests adding further pressure to the firm as it fights off growing competition and stagnant sales in its main markets.

A move to gasoline engines is already underway in Europe as buyers shy away from the still uncertain consequences of possible new legislation or testing procedures on diesel engines next year. If diesel’s emission ranges are revised it could mean higher taxes and the debacle has opened up a debate about just how economical some cars are with “official” mpg figures differing wildly from users’ real life experiences.

The longer term beneficiary may be hybrid and electric vehicles, which are finally gaining a little traction as the driving range of new models gets better and prices become more competitive with volume builds.

Either way — internal combustion or gasoline-hybrid electric vehicle — new car sales are likely to feature gasoline engines more strongly than in the past which will dent catalysts’ demand at least over the next year. The ripples left by VW have further to spread, and we may yet have a new stone dropped in the pond. Everyone hopes VW’s actions were an isolated event, but just as significant for the industry is the review underway of how fuel consumption is tested and assessed. VW’s fall from grace and Johnson Matthey’s current woes may not be the only casualties of greater transparency in automotive testing.