The World Platinum Investment Council issued a recent report on the state of the market which makes interesting reading in the wake of two major issues in the PGM market.

First, on the supply side the resolution of last year’s five-month miners strike led to a surge of metal supply this year, up 20% for the comparable period. That growth should level off in 2016 with only a 2% increase predicted on the back of growing supply from Zimbabwe.

Not surprisingly, falling commodity prices generally coupled with rising supply have contributed to a 30% fall in platinum prices this year. The second and hotly debated issue is the fallout from the Volkswagen diesel engine emissions scandal. So far, diesel sales appear to have held up in Europe better than anticipated and most agree that, in the longer term, tougher EU controls on diesel emissions will be to the benefit of platinum demand, indeed rather than a major switch to gasoline engines as previously suggested.

Diesel Engines Still in the Mix

There is a growing sense that, to achieve overall CO2 reduction targets, diesel will have to remain in the European automotive market mix, albeit with more stringent controls. Automotive demand was set to rise over coming years as this graph from HSBC, created before the VW scandal, shows. 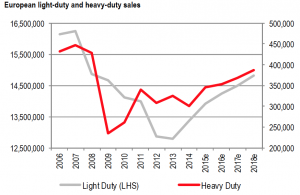 While on the demand side, investment demand has been dropping according to the WPIC, down 19% from 160,000 ounces to 130,000 oz this year, a trend that is not expected to reverse anytime soon even with lower prices. Unusually, investors are shunning the metal as physical demand — from auto-catalysts, jewelry and industrial consumers, is rising. 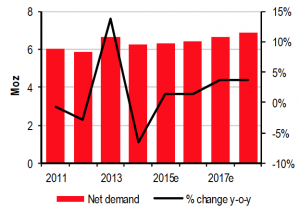 In 2015 the market remained in deficit according to the WPIC, but is expected to be broadly in balance in 2016 with total mining and recycling supply forecast to increase and, therefore, moderate growth from jewelry, industrial and investment markets.

The WPIC doesn’t make price predictions but HSBC isn’t so coy and is predicting a gradual recovery in prices to $1,610 per oz by 2018. ETF anyone?

PREVIOUS POST:
Zinc Closure After Closure, Yet Still No Bottom
NEXT POST:
Johnson Matthey is Feeling the Fallout From the Volkswagen Emissions Scandal