Indian and US Steel Industries Fight to Get Back to Profitability

Both the USA and India’s steel mills are running at less than capacity thanks to the worldwide steel surplus. US steel mills continue to be buffeted by cheap, mostly Chinese imports and lukewarm demand and no one is willing to bet on when, or if, they will ever come back to full production.

On the other hand, the future of India’s steel industry is tied to the percentage of expenditures on infrastructure that the government is expected to provide. The difference between the two is that India’s economy is merely in revival mode, while the US economy is growing at a rapid pace.

A recently released report by Fitch Ratings titled, “2016 Outlook: Indian Steel Sector,” says that increased spending on infrastructure projects, such as housing and smart cities is the key to the revival of India’s steel industry. 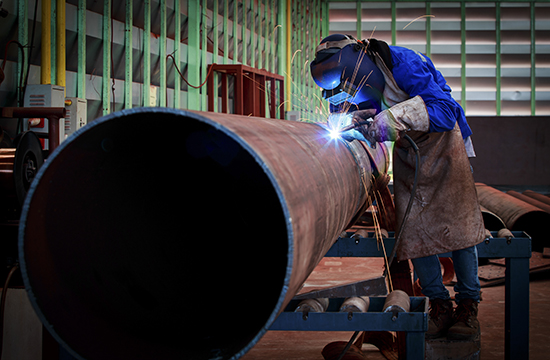 Indian and US steelmakers both face a glut of imports and low prices in their struggles to get back into the black. Adobe Stock/Sasint

Indian steelmakers, however, have to face the onslaught of cheap imports just as their counterparts in the US do, especially imports from China. The difference is, the imports work, to an extent, in Indian producers’ favor, as opposed to how badly they harm US steelmakers.

In India, abundant steel only increases domestic demand in India as low prices and more supply are likely to spur government action as costly infrastructure investments are more likely to be seen as relative bargains.

“Spending by the Indian government on infrastructure will be the catalyst for any meaningful improvement in domestic steel demand. The agency expects India’s steel consumption to improve modestly by 7-8% in 2016,” according to the Fitch report.

No doubt, high imports and soft steel prices globally in 2016 might bring up sales in India, but that will still eventually result in far lower prices, meaning less profit for Indian steel producers despite more sales. Steel companies’ margins are likely to be lower in 2016 but could improve, incrementally, in 2017, supported by “(an) improving domestic demand and the imposition of safeguard duty on imports on certain steel products for 200 days,” according to the Fitch report.

The Effect of Tariffs and Duties

As with steelmakers worldwide, the prices of Indian steel dropped almost a quarter year-on-year as of the end of September. The imposition of a 20% duty on certain steel product imports, effective September 14, has saved the day for some Indian steel companies.

In a similar vein, another global ratings agency, Moody’s Investors Service, cautioned that failure to implement reforms in India could hamper investment amid weak global growth.

According to Vikas Halan, a Moody’s vice president and senior credit officer, a healthy 7.5% GDP growth for India for the fiscal year that will end in March 2017 (FY2017) and a pick-up in manufacturing activity will broadly support business growth.

While India’s steelmakers are banking on growth to see them through these difficult times, one of the biggest challenges that the US industry faces is the growth of steel imports. Its best bet is to reduce  imports and pray that the domestic market will swing back to buying for US mills.

Earlier this year, steel companies including AK Steel, Nucor and U.S. Steel filed trade cases to stem the flow of steel products entering the US. The only silver lining was that steel imports into the US have started to come down on a year-over-year basis for the last five months.