The House and Senate have passed a $305 billion compromise bill to fund highways and mass-transit projects for five years — the longest in nearly two decades and an unexpected show of agreement after years of clamoring by state transportation officials for infrastructure funding.

The bill is expected be signed swiftly by President Obama, who has supported earlier versions of it, to avoid a shutdown of transportation funds to the states by the end of today.

The measure also would renew the Export-Import Bank through September 2019, separate the budget for Amtrak’s Northeast Corridor from the rest of the passenger-rail network, and set traffic-safety priorities. 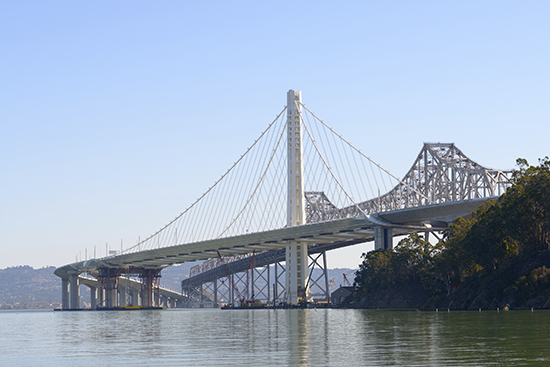 San Francisco’s Bay Bridge is one of the many projects that will benefit from a 5-year transportation bill.

Advocates have said the Ex-Im Bank is a crucial funding and shipment security institution that supports small businesses who want their goods to reach foreign markets. Others have called it corporate welfare that benefits large companies that do business overseas more than small merchants.

The bill would provide money for programs with strong regional constituencies, such buses and ferries, and for the first time set up a grant program guaranteeing funds for large freight projects, which typically haven’t garnered political support because they deliver goods and not people.

Thomas J. Gibson, president and CEO of the American Iron and Steel Institute, said, “The steel industry is not only a user of the highway system, but it is also an important supplier to road, bridge and transit builders. This long overdue legislation will enable steelmakers and our customers to plan for the future, as the bill provides an increase in current investments levels — estimated at 15% for road, highway and bridge projects, and 20— for transit programs.”