Steel Fights Back, Looks to Hot-Pressing, 3D Printing to Win Back Automotive Market

The narrative flow in the automotive industry has been firmly behind aluminum in the quest for lower weight and better fuel consumption, but steelmakers were never going to stand idly by and see one of their most lucrative markets rapidly eroded even though the speed of the change has caught some of them by surprise.

Brian Aranha, Vice President of Global Automotive at ArcelorMittal is quoted in Automotiveworld saying Ford’s decision to switch a large chunk of the F-150 to aluminum “…was a bad surprise for us, we just didn’t see it coming.”

Aluminum might be making inroads, but steelmakers are going to fight to keep their automotive customers. Source: Adobe Stock/AnastasiiaUsoltceva.

Well, whether they saw it coming or not, they are reacting now. Steelmakers the world over are pouring millions into research and development to carve out a role for steel in the car designs of the future.

They have much to fear, in an executive summary to a report by Ducker Worldwide last year called DriveAluminum highlight is made to the rapid gains made by the light metal. 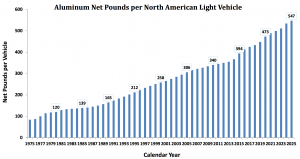 Although the F-150 leads the class with 1,080 lbs. of aluminum, the pickup truck segment has embraced weight reduction more than any other. The average content will be 548.9 lbs per vehicle almost the same as E segment sedans at 549.9 lbs. and SUVs close behind at 410.3 lbs.

The total aluminum content for the 17.46 million vehicles of expected production this year will equal nearly 7 billion pounds or 3.2 million tons, and the rate of gain is fast. Total North American light vehicle aluminum consumption will increase by 28% in 2015 over 2012.

Traditionally, aluminum has been used in engine blocks and castings, but as the F-150 has shown wholesale replacement of structural body parts, hoods, doors and panels can achieve dramatic weight savings. Much of the growth to come is from body panels, long the sole domain of steelmakers. 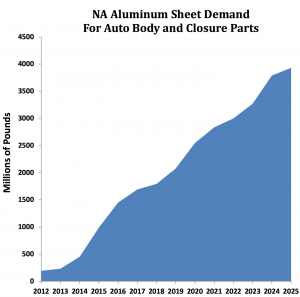 Steel In the Game

Part of steel’s appeal, according to Aranha, is the cost of incremental improvements in weight reduction.

According to Automotive World, a CO2 emissions target of 95g/km has been confirmed in Europe for 2021, while corporate average fuel economy (CAFE) standards in the US will require light vehicles to achieve 54.5 mpg by 2025, compared to around 30 today.

In assisting original equipment manufacturers to hit these targets, ArcelorMittal is looking to provide the potential for a 20% reduction in body-in-white (BIW) weight by achieving higher strength and, hence, allowing the use of thinner (and so lighter) steel.

Alloying and treatment will only go so far. The firm is not alone in now promoting hot stamping of car parts. The traditional cold-stamping route creates a lot of wear on dies and, more importantly, with thinner gauges exhibits “spring back,” whereas hot stamping, with in-die quenching, creates a stronger panel with better precision.

By next year, ArcelorMittal expects to be delivering steels capable of 2,000 MegaPascals (MPa), double where they were at just a few years ago. Combined with laser welding, Arcelor believes hot stamping will allow carmakers to reduce vehicles by a further 3% (100+ lbs) within the next two years at a lower cost than an equivalent aluminum solution.

Beyond that, steelmakers see 3D printing of ultra-thin panels as the next step, saying there is only so thin you can go with a door panel in steel or aluminum before it begins to become wavy, 3D printing would allow the inclusion of stiffeners or stiffening materials overlaying the steel.

ArcelorMittal is not alone in pouring vast amounts of money and expertise into this battle, a struggle that we all stand to benefit from with lower fuel consumption and more innovative designs around the corner. Who said competition wasn’t good for you?