It’s hardly likely to drive volume demand for aluminum anytime soon, but a research breakthrough by scientists from the University of Pennsylvania holds out the potential for aluminum oxide to go where the Nobel prize-winning graphene has so far failed.

An article, “Ultralight Shape-Recovering Plate Mechanical Metamaterials” in the journal “Nature” explains how a team of scientists led by Igor Bargatin, Class of 1965 Term Assistant Professor of Mechanical Engineering and Applied Mechanics in Penn’s School of Engineering and Applied Science, has created a material that is thousands of times thinner than a sheet of paper and yet strong enough to maintain its shape even after being bent at 90 degrees multiple times.

Tiny But Powerful: The Ant Man of Metals

The aluminum oxide is built up into plates currently just 2-centimeters square in layers as thin as 25 nanometers by atomic layer deposition on a patterned silicon wafer. The silicon substrate is then completely removed and a honeycomb structure of ultra-thin aluminum oxide is left behind. The structure was likened to an egg carton, but on a nano-scale, by Prashant K. Purohit, an associate professor of mechanical engineering who also led the study quoted in the Daily Mail. 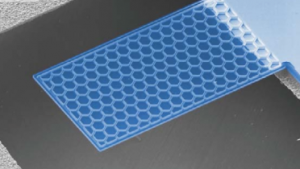 Indeed, so lightweight are the plates they float in the air, descending only very slowly and hold out the prospect of much-discussed, but previously only imagined, insect-size robot drones or similar ultra-small lightweight structures.

“If a crack appears in our plates, however, it doesn’t go all the way through the structure,” said Keivan Davami, a postdoctoral scholar who also led the study. “It usually stops when it gets to one of the vertical walls of the corrugation.”

An insects wing, by comparison, is a few microns thick, limited by the thickness of a cell, but with one micron equivalent to 1,000 nm these aluminum oxide sheets hold the potential to create considerable strength, resilience to flexing and still be lighter than an insect’s wing.

Graphene, by comparison, can be laid down atom by atom but has to be stretched on a frame in order to prevent it from curling. The problem, the Mail reports, is the frames are heavy, negating the value of the intrinsically low-weight, ultra-thin grapheme sheets they hold.

Researchers are hoping use in aviation will drive major uptake of the technology in the longer term as the quest for lighter, stronger and yet more resilient materials has done for composites in the aviation industry.

Editor’s Note: An earlier version of this story omitted the name of the article and the names of the research team that authored it. This updated version includes both.