London Metal Exchange aluminum inventories have been falling for the last two years, but don’t be fooled by suggestions that this should support higher prices.

LME inventories have tumbled some 46% over this period down to below 3 million metric tons. On the face of it, some would think that means the market is tightening, a response to smelter closures by Alcoa and others. 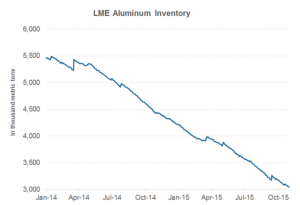 Indeed, physical delivery premiums have risen in the US and the LME price itself, after falling for most of the last year, seems to have hit a range recently between $1,450 and $1,500 per metric ton, where it appears to have bottomed out at? 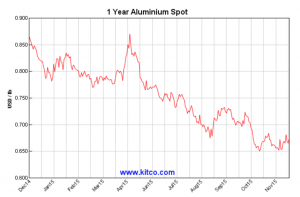 It may be tempting to think so and, indeed, smelters have been desperately slashing costs in an effort to remain profitable as the price continues its relentless fall.

Still, sooner or later, you would think the pain will be too much, forcing enough closures that some semblance of balance is reached — maybe, but not yet.

This week, Rio Tinto Group said its aluminum division was still profitable at current prices and Rio is, by no means, the lowest-cost producer. Nor are half the world’s smelters, in China, where profitability isn’t necessarily a fixed number; state support and subsidies can mitigate low prices.

According to Reuters, those LME inventory numbers are hiding a continuing build up in opaque off-market stocks. Where previously the move from higher-cost LME warehousing to lower cost off-market warehousing was often happening in facilities adjacent to each other in North America= and Europe, now the build up has accelerated in Asia.

Reuters reports total Korean-bonded port inventories of aluminum climbed to around 700,000 mt by the end of November, while CRU is quoted as estimating that total global aluminum inventories, including unreported stocks, have climbed 1.3 mmt this year to an all-time high near 15 mt. In Malaysia, the other major destination for unwanted metal in Asia, there are about half a million mt of Chinese aluminum plate stored at warehouse facilities, according to the industry sources quoted in the report.

How Big is the Surplus?

Norsk Hydro is reported to believe the market will remain in surplus by up to 1 mmt next year and with the LME forward price curve not rising strongly until years 2 or 3. Further out, the stock and finance trade may not absorb this metal with the same enthusiasm as it has done so in the past.

Indeed, if the Federal Reserve raises rates this month, and possibly again in the first half of next year, the environment for the stock and finance trade may be less attractive next year, meaning this 1 mmt will weigh on prices. In such an oversupplied market “bouncing along the bottom” may be about as good as it gets for primary metal producers.