It hardly qualifies as unintended consequences, at least as meant by Locke or Adams, but the outcome of Saudi Arabia’s recent actions in trying to squeeze out higher-cost oil producers has almost certainly gone further than the oil-producing nation had anticipated.

It has gone much further than just about any analyst or oil industry expert was predicting 12-to-18 months ago. 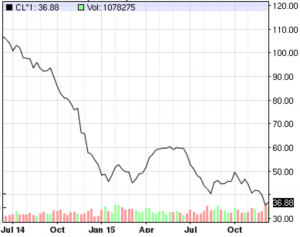 Indeed, since summer the price of oil has continued its downward trend, exhibited for much of last year. If some Organization of Petroleum Exporting Countries (OPEC) members were hoping the recent summit in Vienna would stabilize prices or, better still, support a price recovery, they have been sadly disappointed.

Actually disappointed doesn’t go anywhere near describing how leaders of some OPEC member nations feel. They are desperate as their capital reserves hemorrhage while they try to plug the gap between expenditures and collapsing revenues. Their plight fell on deaf ears in Vienna where Saudi Arabia and Iraq, the two largest producers, effectively pledged to continue pumping come what may, aided and abetted by the largest non-OPEC producer, Russia. As if to hammer home the point, the group effectively scrapped its official production ceiling, taking away any pretense of output constraint.

No surprise, then, that this week Brent crude almost breached lows last seen in December 2008 at below $38.00 per barrel while West Texas Intermediate, the US marker, picked up only slightly to $36.93 per barrel — the lowest since February 2009.

“Don’t worry, Brent, I’m with you all the way, no matter how low we go.” —WTI Futures. Source: Reuters

Iraq and Saudi Arabia have pumped at record levels this year, while Iran is fulfilling the requirements for the lifting of sanctions faster than many had anticipated and look likely to have restrictions lifted next year. Meanwhile lost capacity in Libya is showing signs of reappearing as combatants start talking to one another about a ceasefire and Russia, aided by a ruble that has halved in value, enjoy similar ruble returns for every barrel exported now to revenues twelve months ago.

Oil stockpiles are swelling as a mild winter limits expected demand for heating oil and a stronger dollar adds pressure to all commodity prices. Hedge funds are sensing blood and have been shorting oil for months, building on record bearish positions last week. A Financial Times report says funds’ short positions in the main WTI and Brent futures and options contracts have risen to the equivalent of more than 360 million barrels.

How Low Can Oil Go?

Is oil oversold? We may well look back in a year’s time and see this winter as a low point, but I, for one, am not going to call the bottom. The trend line is down and every driver is pushing the price in that direction. It will take the concerted action of several factors to turn such momentum around.

2016 Will see an acceleration in failures among North American shale producers as interest rates on debt rise and the low oil price fails to cover costs. Will that be enough to significantly support oil prices? Probably, in itself not, but it may go some way to redress the discount WTI trades to Brent. As always, Saudi Arabia remains a key player in the oil game. If they blink and curtail output, prices will stabilize but after incurring so much pain, and with their objective finally coming into view, are they going to do that? Most are betting not.