Fans camped out for days as lines snaked their way across sidewalks and into the parking lot. Some even dressed up as if it was Halloween.

The tension seemed to grow with every media mention as the hype surrounding this much-anticipated event gathered steam.

That’s right, the Federal Reserve held its last meeting of the year and, as expected, raised interest rates a quarter-point! Fed fans had been queuing outside the Fed’s New York Bank in anticipation of Chairwoman Janet Yellen’s press conference and the Federal Open Market Committee‘s statement at 2 PM Wednesday. Hype like this has not surrounded a Fed meeting since back when then-Chairman Alan Greenspan went on his club tour. 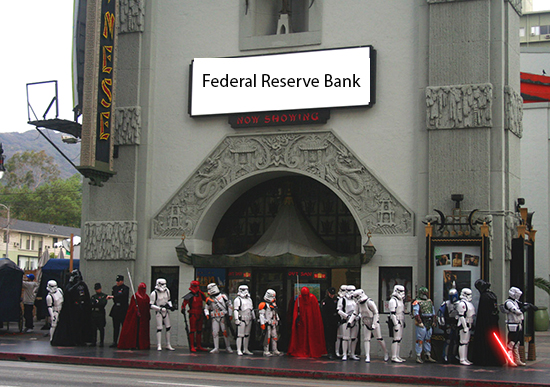 Federal Reserve fans wait in line outside the New York Fed, hoping to catch a glimpse of Chairwoman Janet Yellen. Okay, they might be Star Wars fans at Hollywood’s Chinese Theater. Source: Starwars.com.

MetalMiner Co-Founder and colleague Stuart Burns exclaimed, “well, they finally did it!”

Yellen addressed the massive crowd with a prepared statement, “We believe we have seen substantial improvement in labor market conditions and, while things may be uneven across regions of the country, and different industrial sectors, we see an economy that is on a path of sustainable improvement,” she said to cheers from the amassed fans.

Even the Wall Street Journal went all fanboy and referred to the announcement as “we’ll get Janet Yellen herself, sitting down for an hour to walk through the decision and take questions from a room of Fed nerds.”

Yet many questions remained. How gradual is gradual? Household incomes remain lower than they were a decade ago when adjusted for inflation, and wages have climbed only sluggishly even as firms hired back workers, so, sans inflation, how will the Fed continue to raise rates?

I smell a sequel!