Home | Commodities | How to Invest in Rare Earths? Should You Even Try?
Commentary

How to Invest in Rare Earths? Should You Even Try?

David S. Abraham runs the Technology, Rare and Electronics Materials Center and is author of “The Elements of Power: Gadgets, Guns And the Struggle for a Sustainable Future in the Rare Metal Age.” His career spans from commodities trading and Wall Street to the White House where he oversaw international and natural resource programs. He is a frequent speaker on rare metals and technology demands. This is part two of a discussion about rare metals, particularly rare earth element production and other issues surrounding the metals that fuel the gadgets and technology we love, with MetalMiner Editor Jeff Yoders. Here are part one and part two if you missed them.

Jeff Yoders: Your chapter on the ways that mining companies receive funding was very eye-opening. Is it happening that mining executives are making more money off of investment than they are off of mining?

David Abraham: I think you can go around at conferences and ask people have they ever produced a saleable material and you would find that, much of the time, the answer is no. That’s certainly understandable because a lot of these mines take a long time to develop. You have to do your own due diligence, as an investor, and dig into a company’s financial reports, and make your own judgements, to find out how much someone deserves to be paid.

That’s something that the board of directors should be doing. Some of the time, though, it does seem a little out of line to see what these executives are being paid and judging what they are paid in comparison to other industries. I tried to allude to that. 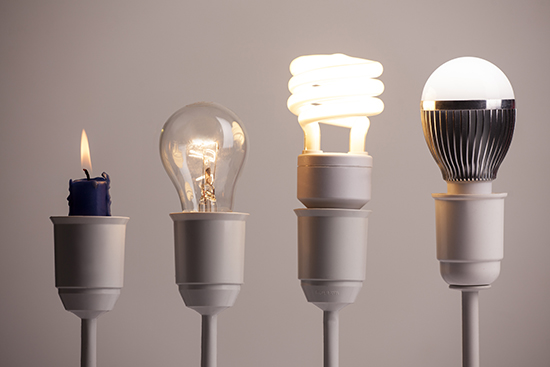 Lighting technology marches on from candles to tungsten to fluorescent to LEDs. Source: Adobe Stock/vladimirfloyd.

JY: It can be a very risky investment to be involved in without, so to speak, your head up.

DA: It is a big risk and, financially, a challenging investment to get involved in. As much as you want people investing in the space, because these materials are critical, the challenge is you don’t know what demand is going to be, exactly, in the future. The prices are so volatile that it’s hard to make projections. You can see a trend line, sure, but you could be investing in the wrong trend. If you made a decision to invest in, say, rare earths specifically because you thought demand for compact fluorescent lighting would take off, well, LEDs came about, and you would have gotten stung.

JY: What’s interesting is a lot of these technologies are not new at all and take off due to availability of materials or recent research. Light-Emitting Diodes (LEDs) are a semiconductor technology that, as consumer lighting, has been around since the ’60s. The road to mass adoption for much of these rare metal products can be a long road.

DA: There is a challenge of knowing what material is going to be needed because of changing of technology. My hope is that if we start clarifying some of the supply chains as best we can and start investing in some of these materials that they will be commodities, in terms of price and availability, and they will be more adaptable for use in consumer technology. We won’t try to NOT be using these materials, and many companies have shied away from rare earths, we’d try to use them more.

Indeed many technologies like LEDs have been around for many years, but the commercialization can happen very quickly. The adoption of LEDs surprised many who thought that rare earths in phosphors would be a growing market because rare earths are used heavily in compact fluorescent lighting —only a fraction of them are used in LEDs. But LEDs quickly won out.

Trying to predict new technologies and, therefore, the elements necessary to make them is fraught with risk. Just before the iPhone came out, Microsoft’s Steve Ballmer said there was no chance it would take market share. Those who are most in the know often have no clue. So, predicting the resources that future tech will use is impossible.

But, with the rapid adoption of technology globally — the smartphone and tablet spread around the world faster than any other technology ever — and a middle class set to grow by 2 billion over the next 15 years, we are sure to use a lot more of these specialty resources, even if some technologies become more efficient in their use of rare metals.

JY: Were you surprised when Molycorp, Inc. declared bankruptcy earlier this year? I don’t think many of us were.

DA: It goes back to the first thing we talked about. They faced real challenges: the amount debt they had to cover, the competition they were up against, and the processing facility they developed, which wasn’t efficient and took longer to set up than expected, indicated that profitability would be an obstacle. Now, Molycorp was not the only one with those challenges. Lynas Corp. has faced those same challenges, and although Lynas has been able to, apparently, last a little bit longer, Lynas also has the good fortune of having forgiving backers in the Japanese government.

JY: Why did you write the book?

I wrote the book, really, to give perspective to a lay audience about where this stuff comes from and the implications when they make decisions to buy computers and iPhones. I wanted to let consumers know that there’s this whole other world of rare metals under their fingertips.