A new report released by the Solar Energy Industries Association and produced by GTM Research forecasts that US Solar installations will more than double next year, reaching 15.4 gigawatts of solar power installed in 2016.

Worldwide, growth in solar installations is expected to rival the boom occurring in the US. Berlin-based research firm Apricum forecasts that 54 GW will be installed worldwide in 2015, with new capacity additions reaching 92 GW by 2020. The largest market for the most common type of panels, solar silicon photovoltaics will be China, with 180 GW of total capacity installed by the end of 2020, followed by the US (83 GW) and Japan (57 GW). 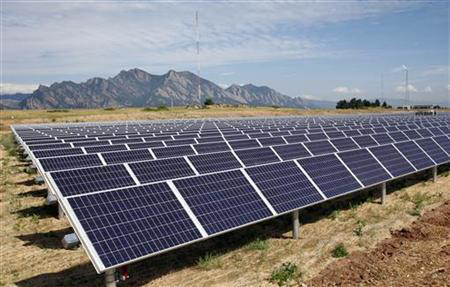 As 2015 ends this week, US installed capacity of photovoltaics stands at 7.4 GW, an improvement over 6.3 GW last year.

Part of the reason for the surge was purchases made by individuals and utilities to beat the scheduled expiration of the federal investment tax credit at the end of the year. That all changed when congress passed a long-term extension of the wind and solar tax credit as part of its omnibus spending deal earlier this month.

Established by the Energy Policy Act of 2005, the wind/solar investment tax credit provides a tax credit of 30% of the value of solar projects. Annual solar installations have grown by at a compound rate of 76% since the act was implemented in 2006. Under the new scheme, the 30% solar tax credit will extend through 2019 and then decline gradually to 10% in 2022. After 2022 the credit will be eliminated for residential solar installations and will continue at 10% for commercial ones. Bloomberg New Energy Finance predicts that the move by congress will add an extra 20 gigawatts of solar power over the next five years.

Solar silicon prices have remained stubbornly low and, while this extension won’t necessarily help them rise, it will spur utilities and homeowners to adopt them for electricity generation. The low prices, in this way, are a feature of expanded adoption and a not a bug as the generous discounts, on top of low prices, will make solar a cheaper alternative to other low-price power supply technologies such as natural gas.

The extension of the tax credit through 2019 is a boon to photovoltaic manufacturers and wind/solar energy suppliers who were quick to celebrate the long-term extension as an important step toward their goal of developing clean energy at an affordable cost through the development of solar projects.

“This is a game changer for our company and will finally allow us to plan with certainty our growth and expansion over the next several years,” said John Billingsley, Chairman and CEO at Dallas-based Tri Global Energy. “Tri Global Energy plans aggressive expansion of both our wind and solar divisions into diversified geographical areas across the US.”