Blood Before the Floor? The Year in Slumping Metal Prices 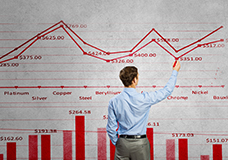 2015 Turned out to be the worst year for metal producers in the past few decades. Not only because of the size of the price decline, which was big, but because prices have fallen from what many considered low levels back in 2014.

With prices at these low levels, and with so many producers underwater, next year is going to be a very interesting one. I think we can call 2015 a painful year for metal producers and my guess is that we will end up calling 2016 a bloody one, but before we enter the new year, let’s review what were the most important highlights of the 2015:

China Got Into Real Trouble

China was the great rescuer of the world economy in 2008 with the launch of an unprecedented stimulus package that triggered the biggest infrastructure investment boom in history, which led to higher commodity prices.

The Chinese economy started to get in trouble in 2011. I just saw an excellent video that already, in 2011, explained what China was getting itself into. It wasn’t until 2015 when China’s economy really hit a brick wall, or at least when the market actually acknowledged it. In 2015 we saw China’s stock market crash (yet to hit the floor), Chinese exports hit record levels, and desperate government actions to spur growth such as the devaluation of its currency. China was without a doubt, the most important factor driving metal prices down this year.

Metal prices fall on a rising dollar. Metals are priced in US dollars and they become more expensive to foreign buyers when the dollar appreciates. In 2015 we saw the US dollar index hit an 11-year high, that had a huge depressing effect on metal prices. After hitting that new high, the dollar has managed to hold its value and, just recently, made another bullish move, triggering more sell-offs in metals.

2015 was also the year when the Fed finally increased interest rates for the first time since 2006. So far, we can’t really tell its impact on metal prices, but, in theory, higher interest rates should boost the dollar higher in 2016 as higher borrowing costs domestically make the dollar more attractive to yield-seeking investors, adding more pressure to metal prices.

Oil had its steepest decline in 2014, but 2015 only served to push prices even lower. Low oil prices have a double negative effect on commodity prices:

First, oil is  not just a commodity, itself, but an asset closely followed by commodity investors. Falling oil prices make investors move away from commodities and, of course, industrial metals. In addition, oil is the main benchmark for energy prices. Lower energy prices mean lower transportation costs and lower production costs, especially for those energy-intensive metals like aluminum.

We now have oil below $40 per barrel and heading south. 2016 is going to be an interesting year for metal prices and it will be critical how these factors play out. Will demand come back to rescue the loss-making producers? Or will we have to see blood before metal prices hit the floor?