Home | Humor | Who Needs an X-Wing? Be Your Own Ehang 184 Drone Pilot! Or Passenger

Who Needs an X-Wing? Be Your Own Ehang 184 Drone Pilot! Or Passenger

OK I know this isn’t going to move the needle on metals consumption, impact prices or restrict metal supply, but it is so cool I just felt the need to share it.

Every year, the Consumer Electronics Show draws thousands of attendees to Las Vegas to showcase the latest ideas and examples of cutting edge consumer technology. It’s a nerd nirvana and this year was no exception with 170,000 attendees able to see the latest virtual reality technology, driverless cars, drones and, yes, the item that caught my eye an autonomous flying vehicle. 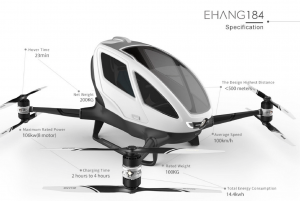 The Ehang 184. Now you can drone yourself to work and back! Source: Ehang.

The AFV is a single seat drone capable of carrying a human. Admittedly due to (they say) US legislation the Chinese Ehang 184 could not be seen in operation and even the firm’s YouTube clips show test flights that probably don’t involve a human passenger but the technology does appear to be approaching the point of manned testing and the company claims it has made manned test flights in less-regulated China.

According to the Financial Times Guangzhou-based Ehang has raised more than $50 million from venture investors and is taking on established fellow Chinese manufacturer and world-leading drone maker DJI in the hobby drone market, for which they have a working model on sale. The Consumer Technology Association expects 700,000 drones to be sold in the US this year, an increase of almost two-thirds from 2014 and expected to top $1 billion this year. Regulation is playing catch up with the market and even hobby users now need to register drones weighing more than 227 grams with the Federal Aviation Administration before flying one, or face civil and criminal penalties. A manned drone, especially autonomous, will require years of testing to get anywhere near FAA approval and a public roll out, but the firm is hoping they may be able to get approval in China sooner, although the CFO’s assertion of a 3-4 month roll out date are almost certainly overly optimistic.

Techcrunch goes a bit further with the details quoting from a press kit that the drone is about four-and-a-half feet tall, weighs 440 pounds, and will be able to carry a single passenger for 23 minutes at a speed of 60 MPH and an altitude of 500 meters or about 1600 ft.

Is That the Jetsons’ Car?

Power comes from rechargeable batteries and four dual rotors driven by electric motors much like a conventional hobby or small commercial drone. The 184 also has rather cool gull-wing doors and rotor arms that fold up -presumably so you can stow it conveniently in your garage or back porch.

Much like a Google car, the drone is said to be totally automated, meaning passengers will input a destination via Google Maps and have no control during the flight. As with a Google car, the company says this will make the machine safer by eliminating “the most dangerous part of standard modes of transportation, human error.”

What could possibly go wrong? Judging by the trouble Google is having getting approval to expand trials of their autonomous car, regulators aren’t going to like the “removing human error” part. They seem hell bent on maintaining an emergency role for the driver — which actually strikes me as the worst possible option.

Drivers will not be able to resist the temptation to jump in when they get concerned and almost certainly overreact resulting in extreme behavior or maneuvers and precipitating more accidents than they avoid.

Still, I don’t make the rules but, equally, when it comes to autonomous drones I wouldn’t have a clue how to fly one, even though I can fly a light aircraft. So, unless all passengers are going to be required to take an “FAA Drone Pilots License” course, should one exist, autonomous seems the only alternative bar remote monitoring by some kind of command and control center.

That would, in turn, end up being automated if these things ever get to tens of thousands in the air. Technical and regulatory hurdles aside, in a month when we are all caught up in Star Wars fever, you have to admit the 184 has a wonderfully Sci-Fi feel about it. Go, Ehang!

PREVIOUS POST:
Steel Prices Offer No Foundation for Any Rise in First Half of 2016
NEXT POST:
Global Growth Still Slowing Down, US Initial Unemployment Up