On the face of it, China’s record iron ore imports last month suggest the uptick in prices during the month wasn’t an aberration.

But even though December’s strong import figure of 96.27 million metric tons will boost 2015 iron ore imports to 953.36 mmt, nearly one billion, it masks an edifice that is crumbling before our very eyes. 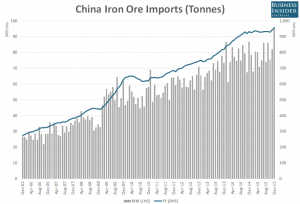 China’s iron ore imports are so high in part because domestic miners have finally begun to respond to the current low price situation and shutter production. Port stocks have risen in line with imports. Inventories have been rising for six of the last seven weeks, according to Bloomberg to 93 mmt.

China is churning out steel in spite of a slowdown in domestic demand with its surplus powering rising exports. China’s steel exports rose by almost 20% in 2015 to a record 112.4 mmt. To put that in perspective that is enough to meet demand in Germany and Japan for a year and still leave almost 9 mmt to spare.

Such a level of exports is untenable in the medium term. Global demand is flat and trade tensions are rising. Exports will have to be reduced this year either voluntarily or by being shut out of mature markets by anti-dumping actions.

Beijing knows this and has been trying to encourage steel producers to close excess capacity via a range of means but largely under the umbrella of environmental considerations. Steel production is a major source of pollution in China and with the country producing more than it needs — both steel and pollution — there is a strong case for a more forceful approach in the months ahead. 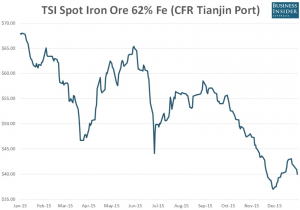 The iron ore price though has continued its downward trend line. It isn’t about demand, it’s about supply and supply has grown relentlessly in tandem with the major producers’ ability to drive down their costs to remain profitable.

Race to the Bottom

Much like Saudi Arabia’s attempts to drive higher cost oil producers to the wall, Rio Tinto Group, BHP Billiton and Vale SA are driving smaller iron ore producers out of business. Just last week Bloomberg reported Anshan Iron and Steel Group are considering pulling funding out of their $2 billion joint-venture in its Karara iron ore mine in Western Australia.

ANZ — the Australia and New Zealand Banking Group —  is reported to have said iron ore will test recent lows and more in the coming weeks while Capital Economics Ltd. is reported by Bloomberg to be predicting a wild ride for iron ore this year as it sees prices dropping into the $20s per mt before rallying to end the year higher.

Goldman Sachs Group Inc. has said the raw material will probably remain under $40 per mt for the next three years, as the slowdown in China becomes part of a long-term structural change. Beijing seems to agree, saying China’s steel production and demand are expected to continue to decline in 2016 according to the industry body the China Iron and Steel Association.

The big three, possibly the big four counting Fortescue, iron ore producers probably reckon they have another 12-18 months to squeeze the competition out of business before they will consider reducing output to more closely balance demand and, hence, raise prices.

With coking coal in much the same position, steel input costs, therefore, should remain low in 2016. Even lower than in the 2015, and hence there remains no case globally for higher steel prices during 2016 in an oversupplied market.

The US market may be the only exception as scrap costs have firmed up of late, putting pressure on producers but the extent to which domestic producers can fend off the impact of imports by anti-dumping legislation may determine price direction in the US. Buyers should consider buying hand-to-mouth as further weakness from a strong dollar and plentiful import supply should cap prices in the first half of this year.

PREVIOUS POST:
Why A Weaker Chinese Yuan Is Bearish For Metal Prices
NEXT POST:
Who Needs an X-Wing? Be Your Own Ehang 184 Drone Pilot! Or Passenger