Why the Federal Reserve Will Not Raise Interest Rates

That stock markets have tanked globally is no surprise. How the Federal Reserve will react is unknown.

Most would accept that the Shanghai market was overvalued and vulnerable to a correction, particularly in view of the weakening domestic economy.

Stock markets in the surrounding region have understandably followed China — their biggest export market and the economy to which they are, for better or worse, tied umbilically. In the Middle East, likewise, a self-induced collapse of the oil price has severely damaged the budgets of oil producers and the entry of Iran into that mix has initiated a further rout of the Middle East stock markets this week.

But the falls in the US, while not as bad as the rest of the world, are on the face of it not as easy to justify when you consider the excellent results many firms are posting. A short video blog by the ever watchable John Auther of the Financial Times explains that, in part, this is an expression of the market fighting the Federal Reserve over perceptions of the future direction of the economy and interest rates.

Falling share prices are only one sign of distress in the markets, the US dollar has reacted to the long-running debate about when and how much the Fed will raise rates by gradually appreciating.

More importantly than the dollar rise against a global basket of currencies, is the rise against its nearest and largest trading partners. In the last few months the US dollar has risen by 20% against the Mexican peso and the Canadian dollar, changing the terms of trade in the region.

This will have a profound effect on the economies of the region in 2016 as Mexican and Canadian products become significantly more competitive in the US market compared to domestic producers and US exporters find it profoundly harder to compete in their neighbors’ markets. 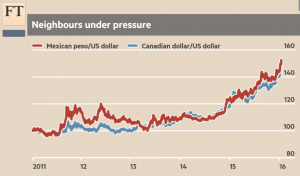 What is the Federal Reserve’s Plan?

Part of the Fed’s drive to raise rates is the belief that it is better to act early and more gradually to combat a rise in inflation down the line that will be the inevitable result of years of near zero interest rates since the financial crisis.

But a combination of an oil and wider commodity price collapse, a stronger dollar and the deflationary effect of China, means the markets do not see any chance of a rise in inflation for years. 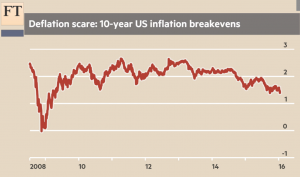 Indeed, the ten-year forecast as illustrated by this graph of inflation expectations shows it has been on a downward trend for much of the last year, quite the reverse of the thinking driving the Fed’s actions.

So divergent are the market’s view from what the Fed is saying that almost no one believes them when they say there will be four interest rate rises this year. Expectations have tanked in the last two months as this FT graph shows. 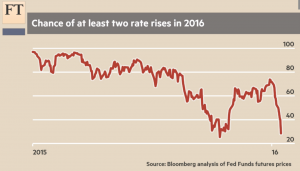 The market is almost certain the Fed will not raise rates again before September at the earliest and maybe not even then.

With so much volatility in global markets you would have expected more of a flight to safety and greater strength in the US stock market, but until there is a more faith in the Fed’s proclamations and fears over China and the Middle East recede, the US is likely to continue to experience significant volatility in spite of the domestic economy performing well.

PREVIOUS POST:
Chart of the Week: Unemployment Applications Up
NEXT POST:
Eldorado Gold Can Mine in Greece, After All