Home | Commodities | Demand Wasn’t the Problem: Why China is Still the Engine of Metals Growth
Commentary

Demand Wasn’t the Problem: Why China is Still the Engine of Metals Growth

China’s annual GDP growth is 6.9%, its lowest since 1990, screams the headline. Yet China is still the engine of metals growth. Even now.

Indeed, the commodity markets have found little else to talk about over the last year or so except for China’s “decline.” Slow growth in China is responsible for a crash in commodity prices goes the argument, but to be more precise they should say slowing growth in China has created a sentiment that commodity demand is weak — when, in fact, it isn’t.

Record exports from China of steel, aluminum and certain other commodities — allied with a global market awash in a tide of commodities such as oil, aluminum, iron ore, coal, nickel (need I go on?) — has created a mindset among, not just investors or speculators, but the global community that we are in is a slump in terms of commodity demand when, in fact, the reverse is true.

Commodity demand has remained robust and positive. The collapse in prices is not about a lack of demand. It is, rather, self-inflicted by miners and oil producers who, for diverse reasons, are producing far too much product compared to actual demand.

Carried away by record high prices and double-digit demand growth out of China, miners, in particular, invested vast amounts of shareholders’ funds in new mining ventures, which have subsequently all come to fruition at around the same time.

China is not above criticism in this. Chinese steelmakers, aluminum smelters and mining companies have been as active as western firms in investing in new plants and mines over the last decade and parts of the Chinese economy — witness steel mills — are now suffering the consequences.

But growth in China has remained positive in spite of Beijing pushing through what has probably been the fastest transition of a major economy from a manufacturing/industrial model to a consumer-led consumption and services economy in history.

The process is far from complete but growth in services and consumption has been impressive even as manufacturing has suffered in some sectors, yet it hasn’t collapsed. According to the Financial Times, fixed-asset investment — which covers infrastructure and factory construction — still grew by 10% in 2015, the weakest full-year growth since 2000, true, but in an economy the size of China’s that’s still sizable growth. All sectors of the economy are growing as this graph from the FT shows. 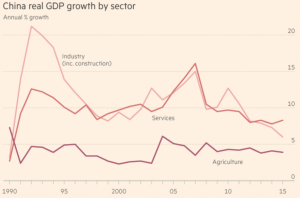 About That Strong Demand…

So is metals consumption. Imports of commodities such as copper remained higher in 2015 than 2014 and are expected to continue to rise in 2016. The fact the rate of growth is slower than five years ago should come as no surprise. Back then, the economy was smaller.

1% Today would have been 2+% five years ago. In tonnage rather than percentage terms, copper consumption in China actually increased last year by a similar amount to a decade ago. In addition, five years ago the economy was in the grip of a stimulus-fueled investment frenzy, that was never a long-term proposition, nor would we have wanted it to be.

Factory output in China rose 5.9% in December, down slightly from 6.2% in November but hardly a slump. Rising factory output is supporting robust metals demand in spite of a depressed and still oversupplied construction sector. Even so, fixed asset investment in construction is still running at 10% growth year-on-year, according to HSBC.

Steel production in China should fall. It really should have fallen long ago. It has been higher than domestic demand for years and has required exports to be dumped on world markets, which has damaged producers in higher-cost, more regulated markets.

To report falling steel production as a negative issue though seems bizarre. Surely, we should be applauding such restraint and not holding it up as a sign of the global economy weakening, right?

As with mining companies, some of that steel production was added, at the time, to support a rapidly expanding construction sector, fueled by temporary stimulus. It was a bubble that had to burst at some point, so why all the gloom?

There are aspects of the Chinese economy that are worrisome. Rising levels of debt and lack of confidence in the exchange rate are just two examples, but considering the size of the economy and the rapid rate of change that has taken place in recent years, it remains a robust engine of growth for metals consumption. The fault for low prices and a glut of supply lies firmly at the door of producers, not consumers.

PREVIOUS POST:
January Lead Price Forecast: Down Almost 10% for the Month
NEXT POST:
Steel-Insight: US Steel Mills Finally in the Pricing Sweet Spot