Can titanium be used as a cost-effective material to make bicycle frames for the average commuter? The superstrong metal has long been used for decades in the creation of high-end bikes that are used, mostly, by consumers willing to pay a premium for more costly materials and more difficult tooling.

Could 3D printing technologies replace more costly manufacturing processes and take away tooling costs to create a sweet spot for titanium as a lifestyle bike? 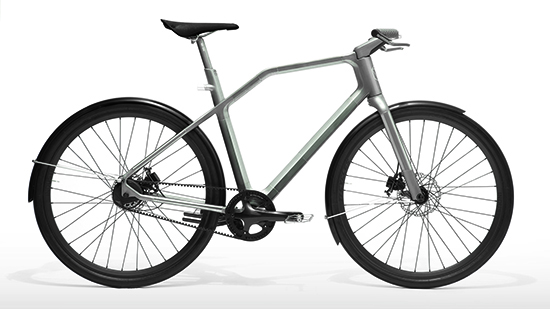 The annual contest is an independent innovation platform for building the urban utility bike. In 2014, its organizers partnered high-level design firms with American bicycle craftsmen to collaboratively develop the next-wave urban bike. Five teams from five cycling-centric cities competed to concept, create and champion their unique vision of tomorrow’s bicycle for the everyday rider.

The designs were innovative in both material and shape. The Chicago entry, for instance, only had one large stem and no top frame tube.

While the Ti/Industry PDX team didn’t win the commuter bike battle — that honor went to Seattle’s entry from Sizemore Bicycle and Teague‘s, the Denny — it may have won the war by showing the bike design and production community how 3D printing can be used to manufacture bikes such as SOLID, using specialty metals, cost-effectively.

Levy and Ti have been building bicycle frames out of titanium since 1990. Titanium’s higher strength and lower density allow for the construction of lighter, higher performance frames. However, they had never used 3D printing as a way to deliver a final product. That’s where Industry came in. By using CAD tools such as Inventor and processes such as direct metal laser sintering (DMLS) with powdered titanium, the designers from Industry were able to limit the use of welds and eliminate stress points in the frame in order to create a bike that, they say, is the best answer to many of urban cycling’s central problems.

“Normally the (Oregon Manifest competition) is an open call for bike builders to design the ultimate urban utility bike,” said Robb Hunter, “but that year was a little bit different, in that it was based on partnerships between these five design firms and five bike builders. You have experts, essentially the engineering team, as the bike builder and the design team. Around that goal, of building the ultimate urban bicycle, we found titanium to be the best of all worlds for corrosion resistance, for weight.”

Hunter said Industry was able to use its normal DMLS 3D printers and printing processes by simply using titanium powers for sintering instead of other powders. They already had machines that burned hot enough to melt and sinter the powders. He also said much of the difficulty of working with titanium was limited by having Levy and his decades of experience around.

As a proof of concept, SOLID shows that 3D printing can reduce the costs of design and manufacturing of bicycle frames with minimal change to normal DMLS equipment.