The state-owned aluminum producer is sending a team to Iran, Qatar and Oman to explore opportunities for setting up a gas-fired thermal power plant and associated aluminum smelter next month according a report in the India Times.

NALCO has been looking at a $2 billion project to set up a smelter in Iran’s Kerman province, but sanctions meant it never got beyond the feasibility stage. Now, with sanctions lifted, the firm is exploring all locations in addition to the Iranian project probably with the intent that they can show the Iranians they have other options and negotiate a better deal.

India is reported by the Indian Aluminum Association (IAA) to have the world’s fourth-largest thermal coal reserves at 250 billion metric tons and the fifth-largest bauxite reserves at 3.29 billion mt while also being self-sufficient in aluminum production. So, you may ask, then, why is a state-owned producer looking to invest $2 billion in a project in the Middle East? 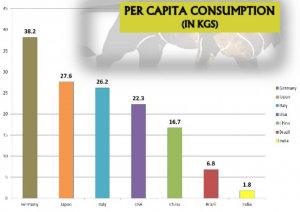 Globally, aluminum has probably the best growth prospects of any of the base metals, even though prices are currently desperately low for producers struggling to cover costs, but India has even better growth prospects than much of the rest of the world. Per capita consumption is only 1.8 kilograms per person compared to over 20 kg in the developed world as this chart from the IAA shows.

Unlike mature economies, the majority of India’s aluminum consumption is from electricity transmission and the power industry, which has considerable potential to expand further in the future. Even so, by 2020 the IAA believes construction will expand so fast it will overtake power transmission with transport, the largest consumer in most mature economies is still some way behind. NALCO believes Indian consumption will double in the next five years to 5 million mt with China and India emerging as the two largest consumers of the metal in years to come. 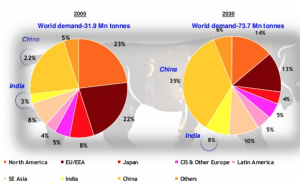 Unfortunately for NALCO, and its domestic peers, power costs on top of the bureaucracy facing mineral extraction, land acquisition and development of major projects in India make it more attractive to build power hungry developments such as aluminum smelters in the Middle East than it does in India.

NALCO does currently intend to supply the alumina from Indian sources and is in talks with the Guiarat Mineral Development Corporation to set up a 500,000 mt per year alumina refinery in the western state if it fails the make the numbers work supplying from its existing refinery in the eastern state of Odisha.

NALCO claims it is a low cost alumina producer but acknowledges that power costs are too high for it to compete with supplies of refined primary aluminum from the Middle East or semi-finished product coming out of China.

If it can’t beat them, or hide behind import tariffs, then the firm has to find a way to compete head on, and that means moving significantly down the production cost curve by accessing low-cost natural gas in the Middle East.

It’s a lesson Alcoa, Inc. caught on to 10 years ago when they started exploring expansion plans for primary smelting in the Middle East. Alcoa’s corresponding moves have paid off handsomely as it has recently been forced to close smelters in the US as their Ma’aden smelter in Saud Arabia has ramped up. If you can’t beat them, then join them does have its advantages.