The World Platinum Investment Council (WPIC) recently commissioned a report by Dr. David Jollie via his research vehicle Glaux Metal to look at the supply-demand fundamentals for platinum and report on the likely price direction over the next six years through to 2021.

We are always a little wary of research commissioned by industry bodies as the pressure to produce a favorable analysis has been known in the past to overrule sound analysis, so in this instance we have compared the findings with this month’s Metals & Mining Quarterly Review by HSBC bank by way of a counter view.

Glaux concludes, and I quote, that the platinum market is likely to be in deficit for each of the years from 2016 through 2021 at an average annual deficit of 250,000 ounces. As a result, prices will rise over the period. Mine supply is not expected to rise significantly with older established mines declining, particularly as investment has been depressed due to low prices in recent years but also as part of a longer-term trend.

New mine production will rise with three new mines in South Africa coming onstream and modest increases forecast in Zimbabwe. Supply from recycling has been on the rise, as it is with all PGMs and this trend is expected to continue in spite of currently low prices. Supply from end of life recycling has become an increasingly important source of platinum supply with supply levels relatively unaffected by modest changes in prices. 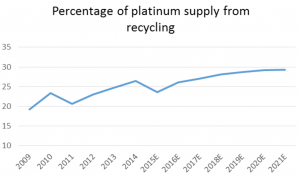 On the demand side, Glaux sees only modest growth across a range of sectors. As this graph from HSBC illustrates, platinum demand is balanced between a number of diverse and broadly uncorrelated sectors. 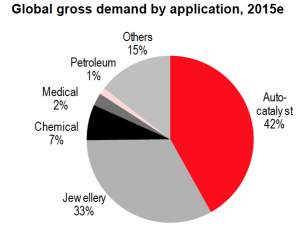 Both heavy-duty trucks — which have a near 100% diesel engine penetration — and light-duty and car demand will remain positive with total vehicle numbers similar to current trends and demand per vehicle rising slightly. Demand for heavy vehicles could as much as double over the next five years in the Glaux report’s opinion.

Jewelry demand, however, is predicted to barely rise with low prices actually depressing demand in Asia as the investment element of the metal’s attractiveness remains subdued.

Industrial use of platinum is further subdivided by the report into catalysts for the chemical and petroleum industries, dental and medical applications, and use in the glass industry. On the basis of a growing global GDP, platinum demand from industrial applications in total is expected to continue to grow although outliers such as increased use of natural gas over oil derivatives or greater use of nitric acid for fertilizers could impact individual segments more significantly.

Finally the “consumption” of platinum for investment purposes could have the greatest swing impact on the demand landscape. Even among the industry, Glaux admits some quarters term exchange-traded fund uptake — as stock changes and some treat it as consumption, although Glaux favours the latter we prefer the former – witness the outflow of metal back into the market as the price falls.

That doesn’t happen with consumption, only with stock changes. Nevertheless, over the period an improved demand picture would need to emerge, or a supply crisis, in order to attract a significant increase in ETF demand.

In a more positive investment environment, the launch of major ETF products created considerable demand swings over recent years but the same is not envisaged in the future. Currently investor sentiment is quite weak so Glaux’s prediction of 135,000 ounces. of annual demand from investments must be something of a best guess.

So how does the report’s findings stand up to comparison with HSBC’s analysis you may ask?

Well, HSBC would agree that the metal’s fundamentals are broadly robust. Mine supply growth. they say, is limited with a multiyear under-investment in capital expenditure and large swathes of the South African supply uneconomic at current prices.

Raising capital for new investment will be challenging following the rout in commodity prices and the fall from grace of the mining sector, generally, so the taps cannot be rapidly turned on even if abundant new supply was available. Which, at current price levels, it isn’t.

The bank is in agreement on automotive demand, resulting from increased legislation, particularly the prospects for heavy-duty truck demand. The bank believes Asian jewelry demand will remain a robust 5.8% compound annual growth rate between 2015 and 2019 with industrial demand remaining positive in line with growing GDP. So, modest growth but, crisis excepted, positive.

As a result, HSBC sees continued deficits and, following price weakness this year, a rising average price from 2017 through to the end of the decade when prices could be 50% higher in the bank’s opinion.

Glaux does a good job of breaking down both supply and demand by sector and region. The results bear comparison with other well-respected sources and add some valuable insight for those interested in the medium-term prospects for this most versatile of metals.

PREVIOUS POST:
Your Comprehensive Industrial Metals Outlook in 2016 – Now Updated for Q1
NEXT POST:
Negative Interest Rates In Japan Drive the US Dollar Up