Home | Commodities | Reuters is Calling a Bottom for Most Metals Markets…. Probably
Commentary

Reuters is Calling a Bottom for Most Metals Markets…. Probably

Because, if it holds mining shares, it is nursing some heavy losses after the last 12 months. 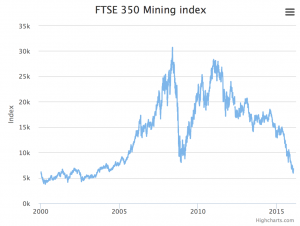 Pension funds, thankfully, are cautious animals. They like solid dividend payers — as many in the mining sector have been for years — but they hate the combination of falling share price, high debt and low commodity prices that will almost certainly result in a cut in dividend payments this year even if mining companies are to survive the downturn.

Miners are expected to face a widespread write-down of asset values this year, falling revenues and high debt payments – a toxic cocktail that has resulted in credit default swaps on some in the sector like Anglo American soaring as this graph from the Telegraph shows. 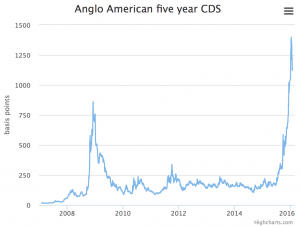 Some investors may have been encouraged by a recent Reuters poll of analysts that suggested, on balance, the majority of metals prices had bottomed and that 2016 would see markets turn.

With a few notable outliers, who were predicting ongoing pain for at least another year or two, most were suggesting virtually all metals would pick up as 2016 unfolded — with the exception of aluminum which no one could see any optimism for in the face of structural overcapacity, too much production and high stockpiles. According to Reuters, aluminum prices are not expected to rise until 2017 or beyond and, even then, lag the rest of the metals complex.

The saying goes, nothing solves low prices like low prices and it is true to say there have been many and widespread announcements of mine and processing closures across the metals complex. Capacity closures are what is driving analysts’ sentiment with some metals such as nickel and zinc expected to pick up markedly. Reuters states the median expectation is for nickel prices to rise 20% by the fourth quarter of this year and by almost 40% next year, while zinc could rise by 25% over the next two years. Not stellar compared to the rises seen in 2009 – 2011, but still a welcome improvement for miners and investors alike.

Copper seems to split the analyst community with a few predicting deficit and rising prices but more not seeing mine closures having enough impact before 2017.

JP Morgan Chase & Co. are the most bearish, seeing massive surpluses running through 2017 and beyond. But to illustrate the divergence of views, JP Morgan is predicting a copper surplus of 316,000 metric tons compared to Capital Economics who are predicting a deficit of 310,000 mt, the median is for a 150,000-mt surplus which, assuming it is reasonably correct, can be expected to continue to weigh on prices.

Indeed, the median view is copper prices could fall further in the first quarter with an average of $4,512.50 per mt with recovery only coming later in the year and into next. Others such as nickel, zinc and tin have more upside and could start to move by the second quarter, but Reuters was at pains to point out that it’s generally going to be a long, hard grind and consumers are not in danger of a sudden and dramatic market rebound.

As for investors in mining shares, you may want to find another sector for a while longer; miners will need more than a stabilization in metal prices to solve their ills.