Home | Commodities | Luxembourg’s Asteroid Mines: Boldly Mining Where No One Has Mined Before
Commentary

Luxembourg’s Asteroid Mines: Boldly Mining Where No One Has Mined Before

When people talk of Luxembourg you could be excused for first thinking of the European Union.

Luxembourg houses the Court of Justice of the EU, is one of three seats for the EU parliament along with Brussels and Strasbourg, and co-hosts the European Commission, along with plenty more organs of EU bureaucracy.

Or for thinking of the tiny state as the home of ArcelorMittal the world’s largest steelmaker, and the European headquarters of Skype, Amazon and Paypal to name but a few multinationals — encouraged, no doubt, by Luxembourg’s status as a tax haven in the heart of Europe.

Maybe it has paid off. Luxembourg has, by some measures, the highest GDP per capita in the world, with less than half a million citizens and all that wealth there’s plenty to go round. But while you are unlikely to think of Luxembourg as a leader in the space race, according to the Financial Times, Luxembourg has a longstanding space industry. The state played a significant role in the development of satellite communications a generation ago, including setting up SES, one of the world’s largest satellite operators.

In collaboration with US and European commercial partners, Luxembourg now aims to help create a space industry to exploit asteroids for metals and other materials that are scarce on Earth, but plentiful in “near-Earth objects” (NEOs). The intention is that Luxembourg will collaborate with, and invest in, one or more space resources companies, although no names have been mentioned. The tiny landlocked state sees a potential asteroid mining industry worth trillions in time.

Asteroids are made from material left over from the formation of the solar system, the FT explains. They are richer in valuable metals than the Earth’s crust, where heavier elements sank into the planet’s core as it cooled. Indeed all of the platinum group metals we mine today either come from magma that has welled up from the deep in the earth’s mantle or following the impact of asteroids in the distant past, they do not occur naturally in the crust. 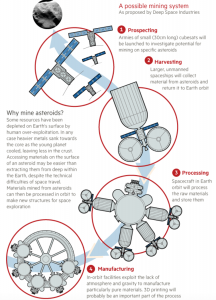 Asteroid mining has two potential categories. The most valuable materials, such as heavy metals in the platinum group, would be brought back to Earth after preliminary processing in space. But other materials, including metals such as iron, nickel and tungsten, would be manufactured in space into spacecraft and tools for further exploration of the solar system, while water from the process would be split into its constituent elements of hydrogen and oxygen and used in rocket propellant according to Planetary Resources, a leading pioneer in the field.

Luxembourg’s enthusiasm, no doubt, shows that this is a long-term proposition, not only to develop the technology — the first successful asteroid “landing and return to Earth with samples” space probe, Japan’s Hayabusa, is only due to return in June of this year — but metals need to be, at least sufficiently, in short supply so prices justify the expense.

At the moment, anyone in the commodities market can affirm the world is not short of metals. Still, the day will come when prices rise due to shortages and, by then, the technology, and Luxembourg, will be ready.