After news of Toyota’s recent supply chain troubles, so ably covered by my colleague Lisa Reisman last week, news from the US car industry, by contrast, couldn’t be better.

General Motors reported $9.7 billion net income for 2015 as it was bolstered by buoyant US light-truck sales. Results for the fourth quarter more than tripled from $1.99 billion to $6.27 billion although, admittedly, benefiting from $4 billion in favorable special items.

Even so, the underlying figures were also boosted by the strong sales for the core North American operations, where earnings before interest and tax adjusted for special items rose 25% to $2.77 billion, on revenue up 9.5% to $27.7 billion. The company said low fuel prices boosted sales of more profitable pickup trucks and sport-utility vehicles.

A rising tide lifts all boats, they say, and a strong North American market has also benefited Ford Motor Co. whose sales of SUVs and pickups soared last year. Ford announced a 13.6% rise in SUV sales for its Ford and Lincoln brands and a 13% rise for pickups. GM’s GMC premium light-truck brand recorded 13% year-on-year sales growth, while Fiat Chrysler’s growth came nearly entirely from a 42% surge in sales for its Jeep SUV brand. All manufacturers finished the year on a high, but for Fiat Chrysler sales were its strongest in the month of December since Chrysler was founded in 1925. 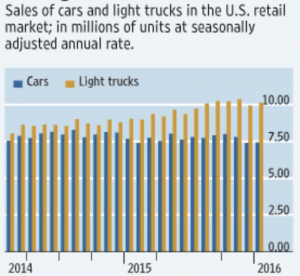 The US car industry has been a major bright spot for metals consumption in recent years with rising volumes driving demand for both steel and aluminum. Indeed, for aluminum, so strong has the demand been many manufacturers have made investments in dedicated automotive-grade production facilities to meet demand.

So, any reversal of that rising trend could have a significant impact on metal demand with knock-on pressure on prices and metal availability at manufacturers and distributors, even for non-automotive commodity grades, this year if production line capacity is in surplus.

January car sales started off actually better than analysts had expected, with two fewer buying days in the month than last year and a massive east coast snow storm, Reuters had been expecting a decline of between 0.5 and 5.0% but, in fact, sales on the whole held up well with only a 0.3% decline.

Fiat Chrysler did particularly well, though, up 7%. GM pickups came to the rescue with best sellers such as GM’s Chevy Silverado and Fiat Chrysler’s Ram both up 5%. Industry-leading pickup Ford’s F-150, though, fell 5% in January. Although the company explains it is maintaining strict market discipline by not offering large discounts for a single model consuming significant volumes of aluminum, if that trend continues there will eventually be ripples in the supply chain.

What About the Rest of the World?

Strength last year in the US market doesn’t equate to strength globally, though. Toyota, one of the most global of brands, has reported sales weak in Europe and Asia. Where Toyota’s sales were up 33,032 in North America last year, they were down nearly a quarter of a million elsewhere. Daimler, by contrast, had a record year in 2015, helped by strong demand in China for its new range of locally produced cars but car sales in China generally are weak and growth is faltering.

According to the WSJ in the January-to-October period, new car sales grew 3.9% to 13.3 million vehicles, but that compares with a 10% gain during the 10-month period a year earlier and was only achieved after Beijing slashed the 10% purchase tax in half on vehicles with engines smaller than 1.6 liters to rejuvenate the car industry in late September.

Before the announcement of the new tax policy, new car sales in the country had dropped for three consecutive months and many fear the trend could return in 2016 as the sugar rush of tax savings becomes the norm.

Finance costs in North America are set to remain low. The Federal Reserve will not be raising rates this year. Meanwhile, employment is strong even if wage growth is modest. Fuel costs will remain low and there is still a backlog of older cars needing replacement.

Car sales in North America should remain strong in 2016, similar to 2015. Although it is too early to back this up with hard figures, the expectation — even among manufacturers — is any growth is likely to be modest.

Growth elsewhere faces considerable headwinds and, although, the consensus is China will maintain positive GDP growth, it has the propensity, with an unstable stock market and currency depreciation, to cause shock waves both domestically and globally.  The automotive metals sector is, therefore, likely to face a more challenging 2016 than last year with manufacturers once more focusing on their costs to maintain similar levels of profitability in the year ahead.