BP’s Energy Outlook 2035 may not be an accurate view of the future Energy landscape over the next twenty years — with so many variables it would be surprising if it was — but it is the basis the oil major is pinning its own long-term strategy on so we can be assured it is well researched, and as a result is about as good as it gets as an exercise in energy market crystal ball gazing.

Not surprisingly, the report states that power generation is expected to account for an ever-increasing share of primary energy consumption as the world continues on a long-term trend of electrification.

The share coming from electricity rises from 42% today to 47% by 2035 and, as a result, power generation will become an increasingly important driver of how the global fuel mix evolves. The report points out that oil rose in the 1960’s, then nuclear in the 70’s and 80’s and, finally, natural gas in the 90’s and 2000’s.

The expectation going forward is, not surprisingly, that renewables will play an increasingly important role. The surprise is, rather, that they will not rise as fast or become as dominant as many would expect based on the current focus by governments and other authorities. By 2035 BP sees a more balanced and diversified portfolio of fuels for electrical power generation.

Surprisingly, with so much focus on carbon emissions and the rapid closure of coal-fired power generating capacity in Europe and parts of the U.S., the report sees coal remaining the dominant fuel, accounting for more than a third of the inputs to power generation, a share it holds at 44% today. With continuing global growth in coal use of 0.8% per  it is expected to remain a significant contributor with the gap between the shares of coal and of other fuels simply narrowing. 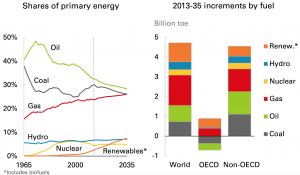 Indeed, rather than dramatic changes in energy sources, BP’s report sees continuing declines in energy intensity — the relationship between rising GDP and rising energy use — as the most significant factor in reducing carbon emissions per unit of GDP growth.

The development of new drilling and fracturing technology and, it must be said by hundreds of billions of dollars of investment, have led to new sources of energy making a significant contribution to supply growth.

Along with technological developments in solar and wind turbine designs, renewables, shale gas, tight oil and other new fuel sources — in aggregate — are expected to build on current successes and grow at 6% per year over the next 20 years but, even then, by 2035 they are only expected to contribute 45% of the increase in energy production.

Tight oil and shale gas make an interesting topic in their own right, and not just because of the current crisis facing those energy sources brought on by the collapse of the oil price. The surprise takeaways are several in this report but one is the growth of tight oil and shale gas is seen as hardly impacted over the report’s term by the current situation and the other is how much more of an impact those combined energy sources have compared to the growth in renewables. 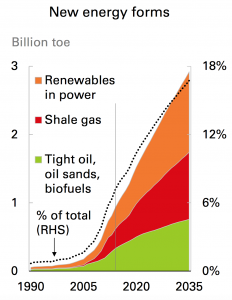 So intriguing (and so important for parts of the US economy) are trends in the tight oil and shale gas industries, that we will cover BP’s projections and expectations for that sector in a follow-up post.