Home | Macroeconomics | Gold is Officially in a Bull Market
Commentary

Gold is Officially in a Bull Market 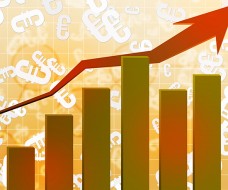 We weren’t expecting to be saying that last year but after a strong showing in the fourth quarter, demand has risen even more strongly since the start of 2016 to push gold prices up to near the 20% threshold needed to call it a bull run.

Demand picked up in the final quarter of last year as central banks bolstered their reserves and investment demand increased even as the US Federal Reserve raised interest rates a World Gold Council report says.

How Did Gold Buck Commodities Trends?

The fourth-quarter performance was driven by a 25% increase in demand from central banks, with Russia and China’s central banks leading the way in purchasing. Russia’s central bank stockpiled the most, adding an estimated 60 metric tons to its reserves.

The country bought around 200 mts of gold last year, 141 mt of it between July and September. Although physical gold demand in 2015 was almost flat compared with 2014 at 4,212 mt, a weak first half was countered by a strong rise in the second half with Q4 up 4% over the same period the year before, a trend that continued strongly into this year. 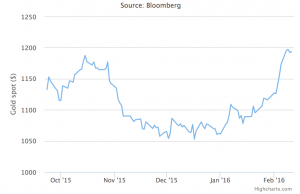 That started a price trend that has been fueled this year by growing volatility in stock markets caused, analysts say, by fears over slowing growth in China. But, in our view, slowing growth in China is old news. Growth there has slowed down in line with Beijing’s predictions and, while the underlying data suggest the slow down is more pronounced than official, figures state there is really little new from that quarter.

The Safe Haven is Real

Gold’s rise is, central bank buying aside, a result of its safe haven status. The price turnaround for Gold has been more fueled by the collapse of, and volatility in, stock markets and currencies. There are also concerns about how Chinese stock markets are reacting more to two other factors.

The first is a fear that central banks have run out of tools to raise inflation, the worry that deflation could take hold, particularly in Japan where Abenomics has proved a dismal failure as the yen has soared even as the central bank has imposed negative interest rates.

Europe, too, has run out of options with the use of negative rates in some markets failing to have any effect to devalue currencies and lack of belief that further quantitative easing in the EU is likely to lift growth.

The second trend is the quiet sale of shares by sovereign wealth funds looking to raise cash to support beleaguered oil-export-based economies. As shares are sold, markets slide and investors take flight, with the price trend accelerated by fund’s algorithms responding to falling share prices by, in turn, selling positions.

Gold has not been the only beneficiary of a flight to safety this year. In the UK, the benchmark yield on 10-year gilts dropped to 1.226% — their lowest point since records began in the 17th century. Returns on US treasury bonds also plummeted to their lowest since the start of 2015 as did German Bunds, as investors sought safety among volatile currencies and falling stocks. Sovereign debt fears, on the other hand, have caused debt to spike in countries such as  Portugal. 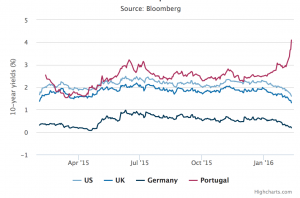 Enthusiasm for Gold’s perceived safe haven status has risen this year with demand increasing from funds and investor buying. ETF Securities’ Gold Bullion Securities, a gold tracking fund, pulled in £239 million ($345 million) according to a Telegraph article. Cumulatively the firm’s gold products attracted some £500 million of new money so far this year as spot prices rose 16% since the beginning of 2016, representing the precious metal’s best start to any year since 1980. Gold prices jumped to their highest level in a year last week, hitting over $1,260 an ounce last Thursday and was currently trading at $1,239.50 an ounce Friday.

With more stock market mayhem expected, gold’s rise looks like it could continue. 2014 Was a volatile year for stock markets, currencies and sovereign debt but 2016 is shaping up to be even worse. Gold bugs will be rubbing their hands in glee at the prospects of a return for the metal’s fortunes.