Following on from our post Monday reporting on BP’s forward-looking Global Energy Outlook report we thought, with the current turmoil in the fracking industry bought on by OPEC induced low prices, it would be interesting to look at what the oil major has to say about the prospects for that business model.

It may be that BP, still largely an oil and gas major, is looking at energy use through their own rose-tinted lens subscription. Many are heralding recent efficiency improvements in solar cells and the drop in prices as the start of a new golden age in solar power generation that, in a world so focused on rising carbon emissions, will sweep away older, more-polluting forms of power generation. BP doesn’t see it like that, and that does not mean to say they are wrong, but it does challenge us to ask if the current enthusiasm for a carbon-free world is misplaced.

About That Shift to Renewables…

History and the current sources of energy suggest that even by 2035 80% of our energy will continue to come from fossil fuels, that may be not what we want to see but it is what the data is telling us BP’s chief economist said in the presentation.

He went on to say disruptive as renewables will eventually become over the next twenty years, it is highly unlikely the integrated technologies will develop far enough or the costs come down sufficiently for a dramatically greater penetration of power generation than BP is already predicting. In its best case scenario tight oil and shale gas each contribute as much of a rise in energy supply as renewables such as wind and solar combined.

Just as surprising is the extent to which the oil major sees the transformational change that fracking will continue to be to the energy markets. Rather than consign tight oil and shale gas to the past, as Saudi Arabia had hoped would be the result of its purposeful depressing of the oil price, BP sees any demise as a temporary phenomena followed by continued growth in a couple of years.

In fact the low price has further spurred innovation forcing energy firms to operate at lower and lower break-even points. Globally, technically recoverable resources are estimated to be around 340 billion barrels for tight oil and 7,500 trillion cubic feet for shale gas, the report says. Although  Asia has the largest resources, North America will remain the largest producer by far, even out to 2035. 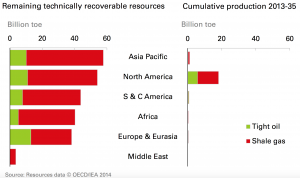 Although unconventional resources are spread across the globe, production is likely to remain concentrated in North America. Cumulative North American production of tight oil and shale gas between 2013-35 is roughly equivalent to 50% of tight oil and 30% of shale gas, technically recoverable resources. The comparable numbers for the rest of the world are expected to be just 3% and 1% respectively.

While production increases outside North America, hopefuls in Europe and even Asia may be disappointed to hear BP thinks the factors that have enabled the dramatic growth of North American production are unlikely to be quickly replicated elsewhere.

Growth of US tight oil and shale gas has been supported by massive investment and rapid technological innovation. Productivity, as measured by new-well production per rig, increased by 34% per year for oil and 10% a year for gas between 2007 and 2014, BP states, contributing to the ability of the industry to continue to operate profitably. This trend has further to go but already it has helped production remain much higher than most had expected and increased estimates of economically recoverable reserves.

Growth in US tight oil is expected to flatten out in coming years, reflecting high well-decline rates and less extensive resources than gas, but in contrast, US shale gas production is expected to grow rapidly over the outlook of BP’s analysis.

Although growth rates moderate gradually, 4.5% is still above that for any other energy source except renewables, and speaks well for the investment steel mills have put into drill pipe and oil country tubular goods products over recent years. In BP’s view, at least this industry will run and run, particularly for shale gas, for the next 20 years or more.