Nickel: You’re The Worst… Despite the Recent Dollar Weakness

A weaker dollar in February has helped most industrial metals stabilize over the past few weeks.

That isn’t the case for nickel. This base metal performed the worst in 2015 and it continues to do so this year. Not even a weak dollar stopped nickel from hitting new lows. Three-month nickel traded down to $7,550 per metric ton last week, its lowest level in almost 13 years.

The demand side of the equation still looks pretty bad. Due, in part, to investors’ fears about China, stainless demand remains weak as there hasn’t been any major restocking from stainless steel consumers there.

Meanwhile, there still haven’t been sufficient supply cuts as producers keep trying to figure out who will be the last man standing. In that way, surplus metal keeps piling up and now the overhang of material looks scary. Even if production starts contracting, high stock levels might prevent any sustainable price hike. 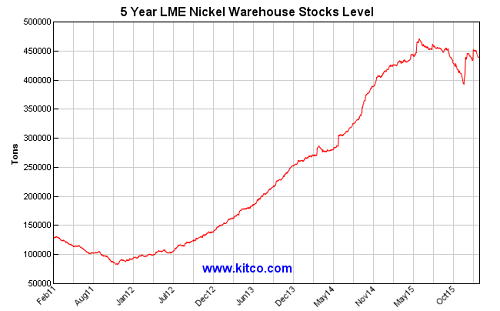 LME nickel stocks have risen even more since December, nearing 450,000 metric tons. Moreover, LME stocks don’t tell the whole story either. It looks like surplus is also piling up in China. Chinese banks already use metals such as copper as collateral in the shadow lending market and, according to Reuters, the same tactics are being used with nickel.

The wire service states that the outflow of nickel plate from Russia to China is not being matched by the consumption of nickel in China or the listed inventories of plate in Shanghai Futures Exchange (SHFE) warehouses as the amount of Russian metal imported largely exceeds what has yet shown up in the SHFE warehouses.

Aluminum and copper didn’t gain much, either, on the recent dollar weakness. Other metals such as zinc, lead and tin scored significant gains on the dollar’s decline.

PREVIOUS POST:
Industry First: An EPD For Cold-Formed Steel Studs and Track
NEXT POST:
Take a Page Out of the US Anti-Dumping Book, European Steelmakers Say