Low oil prices are not just having an impact on oil services companies and producers, the ripples of low prices and constrained budgets are downgrading expectations and altering sales approaches at multinationals around the world.

As we wrote recently, Saudi Arabia and its core OPEC partners are relatively well-cushioned with large financial reserves but, even so, they are running massive budget deficits and burning through reserves in order to try to maintain social and infrastructure commitments. 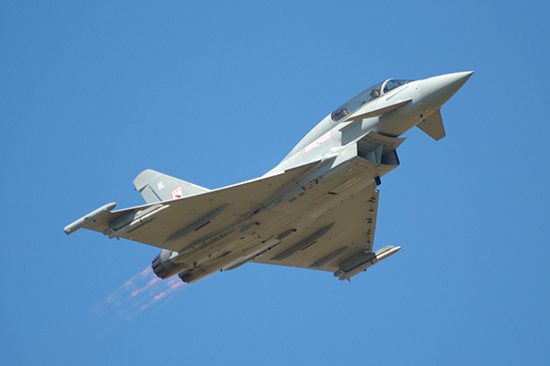 According to a report in the Daily News, Britain’s BAE Systems has slowed production of its Typhoon Jet Fighter, a pillar of it’s sales program in the Middle East, following the failure of Saudi Arabia to place an expected order last year.

It’s Going to be Okay, BAE

Don’t cry for, BAE it is doing fine, sales rose rose 7.6% to £17.9 billion, topping forecasts of £17.5 billion, while basic earnings per share rose 5.7% to 40.2 pence stirling ($0.57) ahead of the company’s reduced forecasts just late last year of 38 pence ($0.54) per share, according to the Financial Ttmes. But the warning signs are there as constrained oil producers’ budgets make buyers like Saudi Arabia, the United Arab Emirates, Qatar and Oman cut back and focus on immediate military needs like training and ordnance.

Not that their needs are not real and significant. Saudi Arabia is fighting a war on one front in Yemen against the Houthi rebels and has been seriously contemplating a second by putting boots on the ground in Syria if a coalition of the willing can be formed, most notably with Turkey.

Defense orders are traditionally placed with a large deposit, particularly by cash-rich Middle Eastern clients. A source of funding firms like BAE have found much to their liking, but constrained budgets could be a barrier to placing an order, so BAE issued a $1.5 billion bond sale at the end of last year to facilitate cash flow in the event of much smaller up-front deposits.

According to the Daily News, Defense analyst IHS Jane’s has cut its forecast for Middle Eastern defense outlay this year by $11 billion as the collapse of crude prompts governments to revisit spending plans. But with at least one war going on — and support for rebel groups in Syria to fund the Saudis and their allies — the nations fighting that war will be prioritizing supplies of missiles over missile launchers and ordnance over howitzers or aircraft, at least in the short term.

BAE’s preemptive move to manage its costs and trim production rates will help it maintain earnings and dividends at a reasonable level until oil revenues pick back up. In the meantime, customers are busy wearing out their previous purchases on the battle field and gradually building up a latent demand for replacement kits. Weaponry may not be quite the oldest profession, but it remains one of the most enduring.