Home | Global Trade | To Brexit, or Not to Brexit? That is The Question
Commentary

To Brexit, or Not to Brexit? That is The Question

And boy will it occupy some column inches in the UK, Europe and, no doubt, the rest of the world in the coming four months right up to referendum day in June.

If you had asked me a week or so back, I would have said it is almost inconceivable that Britain would have voted to actually leave the European Union. Most Brits are, by nature, Euro skeptics but they, like the Scots last year, were always going to take the pragmatic path and stick with the devil you know… or so I thought.

Leaders in Favor of a Brexit

Since then, arguably, the Conservative party’s brightest — Michael Gove — has come out for the Leave campaign and, duiring the weekend, the conservatives’ most charismatic — London Mayor Boris Johnson — has joined him. Boris, in particular, is doing it as a platform for his future bid for leadership, there can be little doubt about that, but he is popular with “the man in the street” and joining the out campaign will sway sentiment.

It has already swayed the markets, sterling nosedived on the news hitting barely more than $1.40, dollars to the pound, from $1.45 the week before. 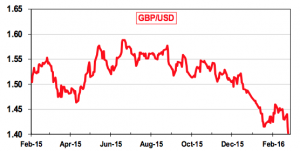 The Euro also fell against the dollar this week, not by as much as sterling but sharply enough to show how the markets can see consequences for the European project at the possible loss of the third-most populous and fastest-growing major member.

Trading Partners if Not Currency Pals

The UK is not part of the Eurozone but something like half of its trade is with the EU and it is a major market for German and French goods, not to mention the destination for considerable investment by French, Spanish and German companies. The Euro is not having a great time of it this year. Growth and expectations are flagging, selective use of negative interest rates are proving a dismal failure and they are doing more harm than good by most estimates and the EU is struggling with a migration crisis on an unprecedented scale.

Who would benefit from a Brexit? Not the EU. Source: Adobe Stock/Stephen Finn.

If Britain left, it is fair to say the EU would lose an influential, liberalizing member, shifting the balance of power in the European Council. The London-based advisory firm Global Council issued a report last year on the consequences of a Brexit in which they said there is little prospect of London being dislodged as Europe’s leading international financial center as its position is sustained by inherent advantages and a large network of financial and professional services that are hard to replicate.

However, existing EU regulations would make it harder for London to serve European markets, particularly (but not only) for retail banking and euro trading. Ultimately this would push up transaction costs and interest rates, but more worryingly would remove a counterbalance to Euro socialist ambitions to tax and regulate financial services to Europe’s detriment.

PREVIOUS POST:
Cost Breakdown Analysis For Competitive Advantage
NEXT POST:
Steel Imports Into the US Up in January