President Barack Obama signed the trade facilitation and trade enforcement bill (H.R. 644) into law yesterday afternoon, thereby reauthorizing Customs and Border Protection and setting in motion a number of deadlines for the administration.

For example, within 180 days, the Treasury Department must issue a report on the currency exchange rate practices of major trading partners, which will supplement the biannual report it already puts out. The customs bill lays out specific criteria for Treasury to follow and then outlines possible remedial actions for problem countries. Also, within 90 days, the Treasury secretary has to issue a guidance on what factors he will use in the report to assess, for example, whether a country “has engaged in persistent one-sided intervention in the foreign exchange market.”

The bill also included the ENFORCE Act to ensure that orders against unfairly traded imports are being fully enforced. Thomas J. Gibson, president and CEO of the American Iron and Steel Institute (AISI) which has long championed the ENFORCE Act, said the measure becoming law is a “great day for the steel industry and all those who want to reign in tariff evasion and trade schemes at our borders.”

AISI also noted, in a statement, that the ENFORCE Act will finally address the growing and injurious practice engaged in by foreign competitors who try to dodge U.S. — often by shipping the product through a third country and/or misclassifying the true origin of imports coming in.

The law provides the U.S. government the ability to investigate such schemes and, therefore, enable the steel industry to seek remedies and protect jobs that have been lost due to these and other unfair practices.

“We appreciate the Administration’s commitment to work with Congress and enact this crucial legislation, and look forward to working closely with them to ensure thorough implementation of these new tools,” Gibson concluded.

Recently released International Energy Agency data shows that the U.S. and Canada are responsible for about 120% of the increase in world oil production since 2005. As oil prices fall below $30 per barrel, it would appear that North America has literally drilled its way to lower gasoline prices. 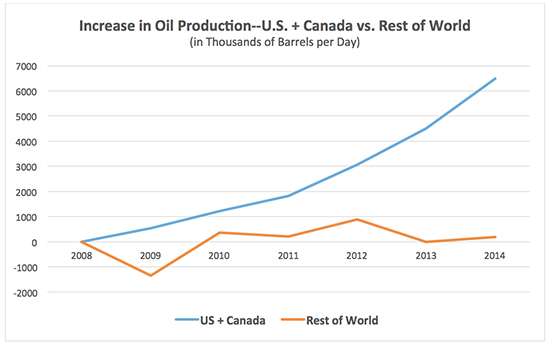 Oil production in the U.S. will reach a record high by 2021 as efficiency gains help domestic producers to combat the low prices that are likely to force hefty output cuts this year and next, the IEA said on Monday.

“The United States remains the largest contributor to supply growth during the forecast period, accounting for more than two-thirds of the net non-OPEC increase,” IEA analysts said.