Could China finally be intending to come to grips with the twin evils of overcapacity and pollution perpetrated on the Chinese economy by heavy industry?

Beijing has been talking about it for some time but, so far, all we have seen is appallingly polluted skies and the devastation of steel markets around the world swamped by over 100 million metic tons of Chinese steel exports. Recent announcements by Beijing, though, give some hope that this year could be different. 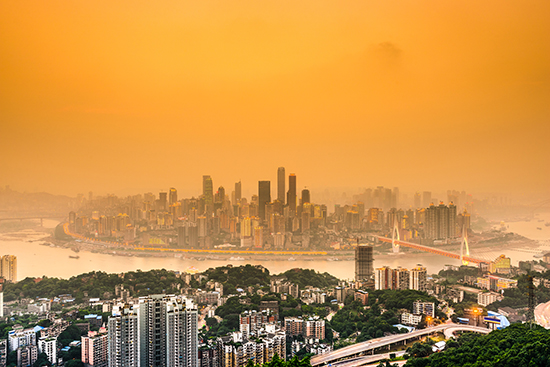 Chongqing, China, is one of many cities dealing with pollution due to overproduction: Source: Adobe Stock/SeanPavonePhoto.

Yin Weimin, the minister for human resources and social security, is quoted this week as saying the central government will allocate $100 billion yuan ($15 billion) over two years to relocate workers laid off from the steel and coal industries. Giving a little more detail, he said Beijing expects 1.3 million workers in the coal sector could lose their jobs, plus 500,000 from the steel sector.

Combined, China’s coal and steel sectors employ about 12 million workers, according to data published by the National Bureau of Statistics. Estimates suggest some 15% of capacity may permanently be removed from the market. The breakdown of employment numbers suggests work has already been done on which firms may be in line for closure and over what time period. The recovered funds are not to be used for compensating the companies, they are expected to be allowed or forced into bankruptcy and to settle their debts, possibly with help from local state governments.

Only then will Beijing’s fund step in to help the workers effected. Not surprisingly, the government’s primary intention is to avoid social unrest as a result of mass layoffs. The days of a totally compliant workforce are fast disappearing and a repeat of the mass layoffs as a result of the restructuring of state-owned enterprises in 1998-2003 that led to 28 million redundancies by Reuters’ estimation would cause mayhem now.

Even the financial crisis of 2008-09 that reportedly led to similar levels of job losses was rapidly reversed by massive fiscal stimulus and could be blamed on global, not domestic, causes. A self-inflicted rationalization of the steel and coal sectors could not so easily be explained away today. In addition, previous mass restructurings occurred broadly at a time of high growth but, now, growth is slowing.

Beijing aims to achieve 6.5-7% growth this year but there will be big winners and losers, manufacturing is struggling but services, as the state intends, are doing somewhat better. Services now account for more than half of all GDP, 50.5% in 2015 and growing. Urban employment is at 4.05% at the end of 2015. Although higher in rural areas, the total for the country as a whole is said to be still only 5.01% according to the National Bureau of Statistics — if you believe their figures.

Still as the economy struggles to rebalance — and witness this week’s 0.5% reduction in bank reserve requirements as evidence that it is struggling — the flood of new graduates coming onto the market will find a less rosy jobs markets than in previous years. Still, if a reduction in steel and coal production is handled correctly the economy will benefit in years to come from the healthier state of those companies that remain and a healthier population if the worst of the polluters are removed. A case of short term pain for long term gain.