The World Platinum Investment Council Ltd. (WPIC), an authority on the physical platinum investment market based in London, has brought out its sixth quarterly report appropriately entitled Platinum Quarterly Q4, 2015.

We don’t mind saying it’s a must for anyone remotely connected with or interested in the platinum market. Packed within the 22 pages of the report — produced for the WPIC by independent research house SFA (Oxford) — is an analysis of supply, demand and market trends that, with this sixth edition, builds up an unparalleled level of granular detail on market trends for this most interesting of metals.

Speaking with MetalMiner, WPIC Director of Research Trevor Raymond threw additional light on the dynamics driving supply and demand for platinum as it reacts to its multiple roles as an industrial, jewelry, investment and green pollution-reducing product.

Just about every authority would agree the platinum market has been in deficit for a number of years, for any other metal this alone would have been enough to support prices, but platinum’s role as an investment product has ironically contributed to it’s price weakness since 2011.

Many had expected the miners’ strike in South Africa to constrain supply so that prices would rise, but a combination of significant producer inventory and a cooling appetite, generally, for precious metals as an investment product led to a net outflow of metal from what Trevor Raymond refers to as liquid-vaulted holdings.

Although ownership of such inventory is understandably opaque, the WPIC probably produces the best estimates of inventory, suggesting above-ground stocks have fallen dramatically in recent years, partiallly fueled by a misplaced investor perception that platinum prices should move in tandem with the wider precious metal market. Also, partially, by the perception that demand is heavily linked to growth in China. Neither of assumption is wholly correct.

By the report’s estimation, inventory has fallen from 4.14 million ounces just a few years ago to 2.315 million ounces today. With the prospect this year of further labor unrest in South Africa over wage negotiations, and the closure of a mine shaft due to fire supply, is expected to reduce output by some 225,000 ounces with only producer stocks able to make up the shortfall, such inventory is likely to dwindle further.

To understand just how crucial South Africa is to the platinum supply market, this graph from SFA (Oxford) illustrates what a crucial role this increasingly unstable source plays, in spite of recently rising supply from Zimbabwe and relatively stable by-product supply from Russia that is linked more to Norilsk Nickel‘s production than sole platinum demand. The world remains heavily reliant on South African supply and, as a result, it is expected to fall in 2016. 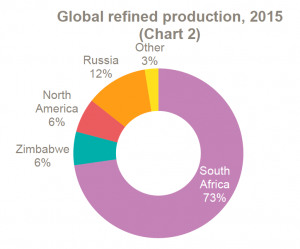 Supply, though, has recovered well since the 2014 strikes, rising 8% overall last year to 7.825 million ounces, mainly on the back of recovering supply from South Africa. But while primary supply increased last year, secondary supply fell as declining metal prices reduced recycling of both jewelry and auto-catalysts.

Raymond explained that the economics of auto catalyst recycling are not impacted by price as much as other factors such as scrap catalyst processors stockpiling product in the hope of a better price or a slowdown in car scrapping caused by low steel scrap prices encouraging owners to hang onto their vehicles for another year. This effects more of a delay to the market, though, than an absolute cessation of supply, so the WPIC expects recycling rates to pick up in 2016.

Total global demand, however increased to 8,205,000 ounces as stronger automotive, industrial and investment demand more than offset a dip in jewellery demand from China, and demand again exceeded global supply in 2015 by some 380,000 ounces.

The hot topic back last autumn was whether the Volkswagen scandal would hit diesel production and, therefore, platinum demand. Although VW, itself, has seen an impact, the world’s largest diesel market, Europe, has continued to grow strongly as both the number of vehicles and the amount of platinum in them, due to the introduction of Euro 6 legislation, contributed to automotive market growth for platinum of 5%. India too showed strong growth of 9% and only some substitution of palladium for platinum in Asia and a slight drop in North America dented an otherwise positive picture.

On the downside, demand from top consumer China for jewelry was down last year. Inevitably, as prices fall buyers initially step back, particularly in Asia where jewelry is seen both as a luxury item and as an investment. But even here new avenues are opening up such as platinum jewelry for men. It is proving popular in India.

But, for us, the standout takeaway was the rapid growth in demand for investment-grade coins and bars. While exchange-traded funds generally followed precious metal outflow trends between 2014 and 2015, the introduction of new products helped a surge in demand for physical coins and bars, with demand rising from 50,000 ounces in 2014 to 480,000 ounces in 2015 contributing to a net gain for investment of 73% from one year to the next.

Such a rapid growth is not seen as likely to continue into 2016 although the WPIC has marked out coin and investments in the form of Bullion Custodial Certificates as a significant growth opportunity for platinum, particularly among retail investors.

On balance, the WPIC sees the market deficit falling in 2016 as the delayed supply from recycling begins to return and South African output drops slightly relative to 2015. Miners have the potential to make up shortfalls from producer inventory, but the WPIC still sees a reduction of 80,000 ounces from South African output and 40,000 ounces from Russia, more than compensated for by a return of recycled supply, as this graph courtesy of SFA (Oxford) shows. 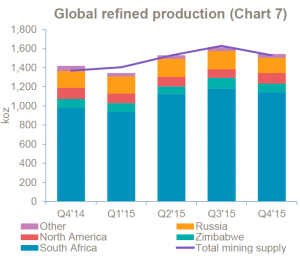 Finally, the report makes a one-line observation that bears some scrutiny and has been repeated by many others in recent months, including HSBC in its most recent quarterly report. The platinum price has only four times previously — over the last forty years — been at a discount to gold for a sustained period. In all previous cases, the price has recovered strongly in the subsequent year. We have no axe to grind one way or another, but we do wonder — with supply constrained and the market in widely acknowledged and persistent deficit and demand from a number of sectors remaining robust — is this discount likely to prevail? History suggests not.