Home | Non-ferrous Metals | Chartists Vs. Investors, Which Group is Right About Aluminum?
Commentary

Chartists Vs. Investors, Which Group is Right About Aluminum?

Three-month aluminum on the London Metal Exchange gained 0.8% to close at $1,573 a metric ton after touching $1,589 per mt, its highest since Oct. 15, Reuters reported this week.

The price has been powering upward since late January and the spread between cash and delivery in three months has moved into backwardation indicating a tightening spot market. The premium for LME cash aluminum over the benchmark three-month contract jumped to $18 a ton this week, the strongest since April 2015, indicating tight near-term supply, the news service said.

At the same time, some big aluminum producers are said to be seeking an increase in physical delivery surcharges of 14-18% for  the upcoming Q2 primary metal shipments to Japanese buyers. Aluminum isn’t alone in showing recent strength, copper has also touched $4,771 per mt, its highest level since November 2015 as reports of reduced supply from Chile, down 13.8% in January, surprised the markets.

On the other side of the fence sit the technical boys such as Reuters’ Wang Tao who produced this graph in the last few days and commented that aluminum’s failure to break the $1,585 resistance level suggested it was heading back down, maybe to $1,527. A reversal that could already be underway over the last few days. 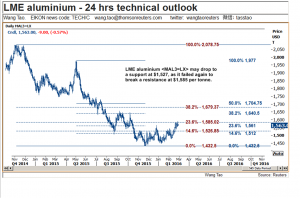 In our view, the physical market remains well supplied, even the nearby tightness is an expression of one or two parties holding the nearby LME warrants and squeezing the market.

That same tightness, though, is deterring stock and trade financing, leaving more metal freely available on the physical market. So, we see this price strength as a short-term move and remain bearish on the basis of the underlying fundamentals. Notwithstanding this one dominant warrant holder’s ongoing squeeze into early March, which may drive prices higher in the short term. In the medium term, we are expecting a softening of prices and believe it is much more likely.