Taken in isolation, a critical, recent report by Swiss bank Credit Suisse  would make little more than interesting if depressing reading, but at least we could park it firmly in the worst-case scenario department. Unfortunately, coming as it does on the back of a raft of PMI numbers from around the world, it takes on an even more worrying tone.

First, in the report entitled “Close to the Edge,” Credit Suisse said another recession in Europe could lead to the collapse of the Eurozone, as the single currency would buckle under the political turmoil unleashed by a fresh downturn. Some parts of the bloc are showing encouraging signs of recovery, but others are struggling.

Collectively, the Eurozone’s 19 member states only managed to grow by 0.3% in the last three months of 2015, despite asset purchases from the European Central Bank and the collapsing price of oil. Unlike the US and UK, the Eurozone’s GDP still lags below its pre-financial crisis peak. Italy, the euro’s third largest economy, was stagnant at the end of last year, while Greece has slipped back into recession. Even growth in Europe’s dominant economic power, Germany, has steadied to just 0.3%. In part due to the falling oil price, insipid growth has been coupled with a fresh fall into deflation in February, raising fears the continent is stuck in a low-growth trap where it is unable to tackle mounting debts. 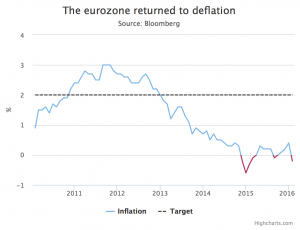 Credit Suisse fears the rise of anti-euro populist forces across the continent “radicalizing” (their word) electorates and creating a mood for exit. Many within the Eurozone fear a British exit would make the prospects of unrest much greater should a major EU member elect to show that the unthinkable is, in fact, desirable.

So how likely is February’s fall into deflation and the recent trend of near-flat growth to continue? Global manufacturing PMI numbers are not encouraging, coming in near four-year lows last month. Growth, as measured by the global purchasing managers index, showed signs of a manufacturing slowdown in 19 of the 24 major economies at the start of the year.

In the Eurozone, figures hit the lowest in a year. In Germany and France’s readings came in at 50.5 and 50.2, respectively, but Greece fell back to 48.4 and even Ireland — which had been a powerhouse last year— is falling back. China’s manufacturing sector also recorded its lowest reading since November 2011 at 49.0 suggesting Eurozone exports to that region may continue to struggle this year.

Even in the US, manufacturing only managed 49.5 and, while many mature economies like the US have larger services sectors, manufacturing PMIs still provide a valuable guide to economic activity. 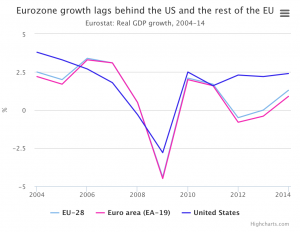 Much will depend on the European Central Bank’s ability to lift the Eurozone out of deflation and achieve some growth. Further quantitative easing is almost inevitable but will be of diminishing impact. Negative interest rates hold the risk of unforeseen consequences and many fear they will cause more harm than good but the Eurozone is increasingly looking at such radical steps in order to stimulate growth.

With unemployment stubbornly high and an unprecedented tidal wave of economic migrants pouring into the region from Syria, Iraq and north Africa the challenges may prove too much for Europe’s fragmented political decision making to handle. Increasingly it is dawning on the populous how undemocratic the system is with remote unelected leaders in Brussels and Strasbourg making decisions over the lives of nearly 500 million people.

In times of growth and stability Europeans have shown they are happy to put up with this state of affairs. In the event of a prolonged recession, such patience might be stretched thin.