There are winners and losers whenever markets move significantly, whether they are currency markets, metal markets or other commodities such as oil or agriculture.

The last two years have seen a massive shift between winners and losers across the globe depending on whether countries are net importers or exporters of a range of commodities, most of which have plunged in price. 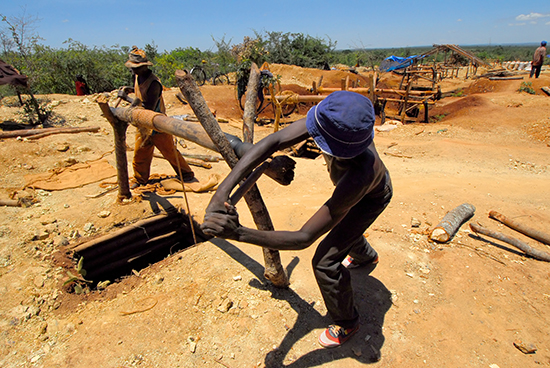 Once the lifeblood of a new African middle class, a reliance on mining and other export industries have caused economic collapse there. Source: Adobe Stock/Africa.

Some regions, though, have suffered more than others and while one can say the OPEC leaders — such as Saudi Arabia, the United Arab Emirates and other Persian Gulf states — are feeling self-inflicted wounds, other producer-states never supported the idea of taking on US shale drillers in the first place, yet they have been hit harder than the Gulf states by the plunging oil price.

Nigeria is one such country where the revenue shock has been so severe the government may shortly be forced to devalue its currency in spite of fiercely resisting such a move for the last year. Metals producers such as Zambia and the Democratic Republic of the Congo are arguably even more vulnerable as such a large proportion of their revenues come from raw material exports such as copper, zinc and cobalt.

The last 10 years have seen the rise of an African middle class complete with private schools, comfortable homes and cars. Its expansion came mostly on the back of mining and oil. With population growth still high, new entrants are streaming into the market place just as jobs are disappearing. Even in South Africa, which has the most diversified major economy in Africa, unemployment is running at more than 25% with the numbers rising to nearly 35% if those that have given up looking for work are included.

2015 was bad with mass layoffs, cuts in capital and infrastructure spending and the withdrawal of benefits by mining companies even for those who still have work, but Mark Cutifani, chief executive of Anglo American PLC is quoted as saying 2016 is shaping up to be worse.

Zambia, which was touted as the African economic growth poster child just a few years ago, is experiencing a collapse in its currency, which — to its credit — Zambia has allowed to float. Aly Khan Satchu, an independent trader in Nairobi, is quoted in the Guardian newspaper as saying “In Zambia, if you put $100 in the Zambian market at the beginning of last year, at the end of the year, you would be taking out 14.”

Market Opportunities — Even in Collapse

On balance, though, Africa as a whole is going through, and remains destined for, a prolonged rough patch. The region is accused of failing to invest in infrastructure and nurture value-added industries and agriculture when times were good and the coffers were overflowing. Now, with their backs to the wall, there is no money for such projects and for most it’s the same old boom and bust.