Few metals have confounded investors and market analysts more than nickel. Indonesia’s ban and a perceived high cost base to China’s nickel pig-iron market have, for some years, led many to believe a rise in prices was only just around the corner.

But Nickel prices have remained hugely depressed and stocks of refined metal have continued to rise. Nickel prices slumped to a 13-year low last month and still remain below levels last seen in 2008-09, according to the Wall Street Journal. In spite of prices being so low that virtually no producers are believed to be making money, capacity isn’t being closed fast enough to have any impact. At the heart of the problem is slowing demand in China as the below graph from the WSJ shows

According to the WSJ, stainless steel production in China is projected to show no growth until 2020, and, indeed, has been more or less flat, fluctuating either side of a line, for a number of years.

Part of the rationale for higher prices was lack of ore when Indonesia significantly reduced exports of unrefined metal, but China had been stockpiling ore for some time and when the crunch came simply switched to the Philippines for ore supply. Since then, refined imports have been substantial but Citi Corp. is quoted as saying “We believe a significant proportion of the 258,125 metric tons of refined nickel imported into China over the first 11 months of last year was used for collateral financing rather than real demand,” The Shanghai Futures Exchange’s rising stock levels support this, underlining the lack of end users, which an be easily read as stainless steel production demand. 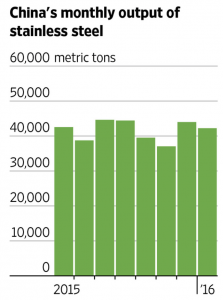 China’s NPI producers have responded to both low nickel prices and soft demand from the domestic stainless steel market as imports of nickel ore contracted by 26.3% in 2015 and are down by around 9.6% year-over-year in 2016 so far.

Meanwhile, inventory of refined metal has risen alarmingly on the SHFE by ten-fold from just May of last year to January of this, to 58,776 mt and on the LME a whopping five-fold since 2012 to 445,000 mt today. 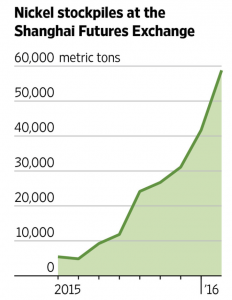 Yet producers have been reluctant to close production even though Norilisk Nickel, the world’s largest producer, has been calling for closures — but presumably by other people because among the majors Norilsk is believed to be the only one still making money as this graph it recently released illustrates.

Even though CRU believes the market, particularly China’s NPI producers, will have to respond to low prices this year and curtail production to the point the balance will move into deficit.

But with so much inventory around and demand growth non-existent any sustained rise in prices seems far away.