For the past three years, Mario Longhi has been forced to stop production at several facilities — he’s closed one plant permanently, temporarily idled two more and he’s planning to overhaul another to add an electric arc furnace — and reduced the size of the workforce at Pittsburgh-based United States Steel Corp.

But, at the Platts Steel Markets North America Conference on Monday, Longhi said he remains optimistic the 115-year-old company is charting a course for future success.

Longhi said U.S. Steel has accounted for $815 million in cash savings in 2015 and another $570 million in 2014 from what he calls the Carnegie Way, a reform program aimed changing the company’s culture. Most of the savings were achieved through improving manufacturing processes and supply chains.  Andrew Carnegie was a founder of the 115-year-old steelmaker. 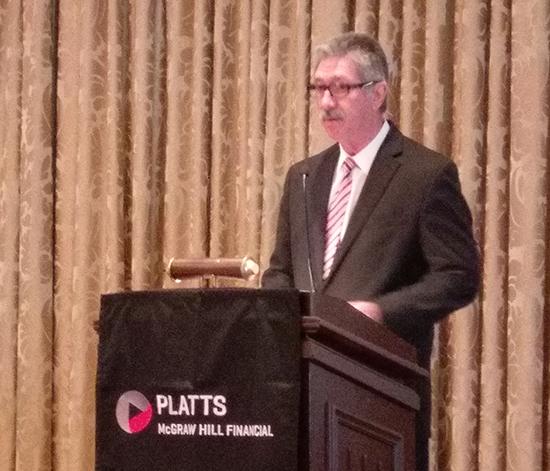 Longhi said the reforms have also led to closer, more-integrated customer relationships and delivering new steel solutions. He said U.S. Steel could now deliver more alternative materials and advanced fabrication that customers had clamored for. He also noted that U.S. Steel wants to get back markets long-thought lost to other materials.

“We can compete for products and parts we’ve lost to other industries. We can find better solutions than other materials,” Longhi said. “We can make them thinner, lighter and stronger. Is the beverage can market really lost forever to aluminum and plastics?”

Addressing the global overcapacity issue, U.S. Steel was one of the petitioners in the anti-dumping case that was initially decided by the Commerce Dept. yesterday, Longhi said foreign dumping  continues to be a big problem.

“Foreign governments created this problem, not market-based economics,” he said. “The injury standard was clarified, for trade cases, for the first time since 1978,” Longhi said, speaking of the new customs bill, part of which was the ENFORCE act. “Nobody really understood the intent of the law in 1978, the language said that any action that after could lead to injury we, as an industry, were already entitled to protection under the law (from that). We have to remain aggressive if we want this industry to survive.”

While Longhi praised the ENFORCE act and its passage, he stopped short of endorsing it as having solved the recent overproduction and dumping issues that have plagued the US market.

“We need now, I think, to properly enforce the (laws) that we have,” Longhi said. “For example, once you identify that some company or country is bypassing the law, it takes two years to make a trade case. You win it. It sometimes take two more years for border control to act on this thing. I think the laws are in a much better position now, but there is something else. Whenever a determination is put into place it needs to be observed and it needs to be made present in every single piece of reference that is published that this country or this company has a 260% determination on them. People need to be reminded of that. There is a major opportunity for the rule of law to prevail in this current environment.”

Longhi said that until the ITC concludes the current trade cases before it, it’s difficult to tell if the tariffs are having the desired effect even though benchmark steel prices and other prices are up since the initial determinations came out in the last few months.