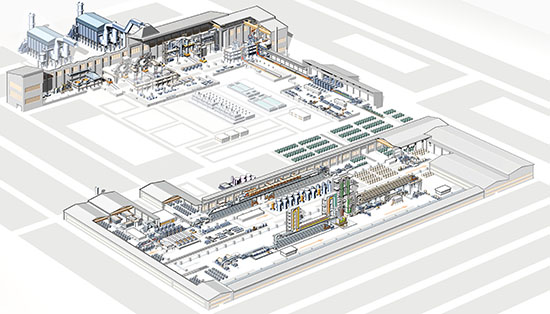 All equipment will be linked to the internet on Big River Steels 1,300-acre campus in Osceola, Ark. Source: SMS.

Bula said the startup’s finishing (annealing and galvanizing) operations will be online by the end of March, while the melt shop is scheduled to ramp up in November. He said the Big River’s inbound scrap barge unloading dock on the Mississippi River is up and running.

The mill’s electric arc furnace will initially feed one caster. Scrap steel will be delivered to the melt shop to be melted by the EAF. The molten product will then go to a ladle metallurgy furnace, which will refine it. From there it will go to an RH degasser. The “flex mill” will be the first of its kind in North America that Bula said combines, “the best of EAF and integrated mills; it’s a combination of the two. We’ve got a mill that’s built to make grades unheard of at the mini-mill level.”

Speaking of those investors, Bula said the project is backed by the German government — which has supplied “very affordable” debt terms — and a variety of domestic investors that includes the Koch Minerals subsidiary of Koch Industries, the Arkansas Teacher Retirement System and Miami-based Global Principal Partners.

The company plans to offer niche and specialty steels for electrical grid systems and other energy and construction applications, although he did add that BRS does not want to compete with Nucor Corp. or Steel Dynamics, Inc. for construction projects. Bula said the products the Osceola mill will make will be non-commodities that “we can compete with worldwide.”

He also said BRS signed a deal in November for SMS to provide full-plant technology solutions to make the Osceola operation a “smartmill.”

“Imagine a mill where each piece of individual equipment talks to each other,” Bula said. “SmartMills are the future and Big River is going to be at the center of it.”